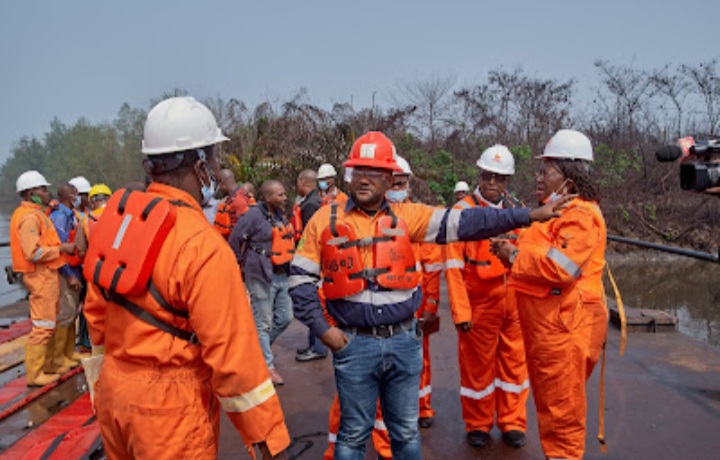 Port Harcourt — There was a mild drama in Opu-Nembe yesterday, after the Joint Investigative Visit to the Nembe oil spill site by industry regulators, Aiteo officials, the Bayelsa State Government and members of the host communities.

While the regulators attributed the oil spills which polluted the Santa Barbra River and Nembe creeks to sabotage, experts from the Bayelsa State Government and members of the community accused the operator of tampering with the valves before the JIV.

As a result, the JIV became inconclusive as no consensus was reached by the joint investigative team, as the Bayelsa State Government blamed the operator for not preserving the well head for evaluation and scrutiny, after the leak was stopped.

The JIV was expected to ascertain the cause, volume and impacted areas of the Nov 5 oil spill, following a visit by Minister of State for Environment Mrs Sharon Ikeazor to the spill site earlier in the week.

Speaking after the JIV on Thursday, representatives of the National Oil Spills Detection and Response Agency, and the Nigerian Upstream Petroleum Regulatory Commision, said the oil spill was caused by sabotage.

A representative of NOSDRA, Mr Ismail Baba-Ahmed, said that from his expertise on fluid mechanics and his interactions with the well head experts who plugged the leak, only vandalism could have caused the spill.

Baba-Ahmed explained that he gathered from the well head engineers that the threading on the well head casing where the valve was removed was not worn out, a development that suggests that the leak was not caused by pressure.

Similarly, a representative of NUPRC, Mr Adetoyibo Adeyemi, agreed with the position of NOSDRA, adding that physical examination of the failed well head from an engineering point of view indicated that the pressure from the oil well was not sufficient to blow the well.

However, representatives of the impacted communities, Bayelsa Ministry of Environment and Bayelsa Technical Committee on the oil spill subsequently declined to sign the JIV report and made the exercise inconclusive.

Head of Pollution Control, Bayelsa Ministry of Environment, Mr Enai Reuben, noted that the JIV team was not able to see the exact point of leak for physical examination and hence could not ascertain the cause.

Reuben said that he had reservations over the procedure of scheduling the JIV after the operator had tampered and fixed the missing valves that would have been scrutinised by the JIV team.

According to him, it would be inaccurate to draw conclusion without seeing the leak point in an investigation that is evidence based and wondered why the well head could not be preserved for evaluation after the leak was stopped.