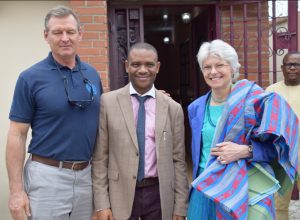 Port Harcourt — Netherlands’ ambassador to Nigeria, Ms Marion Kappeyne, has pledged to support the Nigerian Government and the Hydrocarbon Pollution Remediation Project, HYPREP, in the clean-up of oil-impacted sites in Ogoniland.

The ambassador said this while inspecting one of the less complex sites which is undergoing remediation, in Ebubu, Eleme, during which she warned against the repollution of the Ogoni environment.

Kappeyne explained that she had to come to Ogoniland to see things for herself rather than just sitting and reading stories on the pages of newspapers in Abuja.

She expressed confidence that with the collaboration and supervision of the clean-up by the United Nations Environment Programme, UNEP, the clean-up will be of international best standard.

“I came to see things for myself rather than sitting in Abuja and just reading them on the newspapers. This part of the country (Niger Delta) is very important, we are following things up to ensure the clean-up is a success.

“Be assured that you are not forgotten, we came to see how we can support the clean-up.

“However, It’s no one’s interest that the land which is being remediated gets recontaminated again. I understand the impatience that people want to see results, that their lands are cleaned. I can see that work is ongoing and I do hope that it will produce results soon.”

Dekil explained that biocell is biological treatment facility that allows contaminated soil to be treated through natural microorganisms, while describing the process as a top performance.

“We excavate contaminated soil and put it into the biocell, then subject it to bio-remediation treatment, so as to allowed the natural microorganisms to degrade the contaminated soil to a level that is now good enough for us to return the soil to back to where we took it from.

“This is a contaminated soil treatment technology called biocell, without the integrated soil management centre, we have this technology for the less complex sites and that is what we are doing.

“This is the first time a Nigerian government is undertaking a clean-up process with practical steps to remediate the Niger Delta  environment, and the process as top performance.”

Cowing, explained that the Federal Government re-engaged UNEP to assist HYPREP in the implementation of the recommendations, it had made in the report in 2011,

He explained that as part of the process, UNEP took members of the clean-up governing councl, including the Minister of Environment, Minister Niger Delta Affairs and the Managing Director of SPDC, to the United Kingdom to have a first hand knowledge about project of this magnitude.

“A good preparation for the biological remediation of the site, this is a less complex site so the remediation by nature is going to be less complex. When we move to the heavily contaminated sites, then we can be looking at a more sophisticated remediation approach. For site of this nature, what I am seeing now is appropriate and in line with what I had expected.

“The Nigerian government has re-engaged UNEP to help HYPREP  implement this cleanup project, and by help means that we are strengthening the capacity of HYPREP.

” We have initiated a number of technical training courses, we have also taken members of the clean-up governing council to the United Kingdom lastweek and we exposed them to large remediation projects in UK, so they would have an understanding of how  projects of this nature are done in the UK, the technology, planing, contractual relationship and also compliance with legislation.”