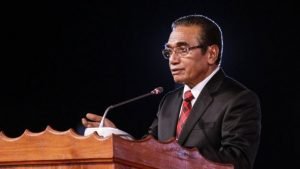 Those deals would give Timor Leste a majority stake in the project, along with remaining partners including Australia’s Woodside Petroleum and Japan’s Osaka Gas.

President Francisco Guterres said in a statement to journalists at the presidential palace in Dili this week he had vetoed the decree, and called for the proposal to be revised.

“This veto aims to prevent the over-stretching of the Petroleum Fund’s direct investment rules and policies,” Guterres said, among other issues.

The decree could in effect “misrepresent or dilute the difference between financial assets and other assets,” he added.

The proposal would also remove a 20 percent cap on state participation in oil projects, and would allow Sunrise and other projects to bypass approvals by parliament.

“The Petroleum Fund and the State Budget are integrated in a coherent manner, and we therefore need to continue the effort to ensure a prudent, open and transparent management,” Guterras said.

A spokesman for the East Timor government said this was a matter between the president and national parliament and declined to comment further.

Discovered in 1974, the Greater Sunrise fields, which hold around 5.1 trillion cubic feet of gas, straddle the maritime border between Australia and East Timor and a border dispute has delayed its development.

The border issue was settled earlier this year and East Timor wants to develop Greater Sunrise by piping gas to a liquefied natural gas (LNG) plant on its south coast, while the project partners favour a plant in Darwin in north Australia.

Last month, East Timor announced an agreement to buy Shell’s 26.56 percent stake in the project for $300 million, after Conoco said in early October it would sell its 30 percent stake for $350 million.

However, the purchases were subject to funding approval by the East Timor Council of Ministers and parliament, as well as regulatory and other approvals.

Referring to the president’s decision, a Shell spokesperson said the company had been advised by the Timor government of “a number of options available for funding the transaction” and was committed to completing the process with it.

A spokesperson for ConocoPhillips Australia said the veto “is not necessarily the end of the process and our agreement recognises time may be required for this important process.”