19 November 2015, Abakaliki—Ebonyi State command of the Nigeria Security and Civil Defense Corps, NSCDC, has arrested two persons suspected to be pipeline vandals in the state. 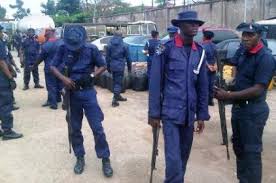 Briefing newsmen at the command headquarters in Abakaliki, the state commandant of the Corps, Shuayb Jibril explained that the two suspects were arrested between 2a.m. and 6:30a.m. of the fateful day in Ivo Local Government Area.

According to the commandant, the suspects, Ifeanyi Chukwu, 29, and Nkem Ndika, 29 who hailed from Amaonye village in Ishiagu community of Ivo Local Government Area of the state would be charged to court as soon as the command concludes its investigation on the matter.

He cautioned youths in the state to avoid vandalizing pipelines and other Federal Government installations within and outside their communities as the command was prepared to arrest and prosecute anybody found culpable.