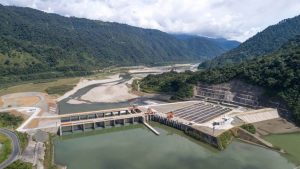 The findings come after CELEC in May requested arbitration through the International Chamber of Commerce to settle a dispute over cracks in the 1,500-megawatt plant’s machinery that have prevented it from operating at full capacity since it was completed in 2016, after $2.2 billion in construction costs.

During a shutdown of four of Coca Coda Sinclair’s eight turbines for planned maintenance, state-owned CELEC discovered missing bolts on some of its valves, CEO Gonzalo Uquillas said, adding that the problem could prevent valves from opening and closing to adequately regulate the flow of water.

“Of the 96 bolts that secure the seals on these valves, some bolts are missing,” Uquillas said in an interview on July 16. “I don’t want to believe they weren’t installed, but they are missing.”

The maintenance shutdown of the plant, which provides nearly a third of the Andean country’s electricity, was initially planned for May through September but may now be extended for 60 additional days due to the discovery of the new problems, Uquillas added.

Neither Sinohydro nor China’s embassy in Quito responded to requests for comment.

The missing bolts are a separate issue from the cracks in the machinery, which CELEC is concerned could lead to leaks. CELEC is hoping to get Sinohydro to cover $20 million in costs to repair the cracks through the arbitration proceeding.

Uquillas said Sinohydro has not yet responded to CELEC’s notification that it has sought to initiate arbitration. He added that an inability to resolve the dispute could delay the definitive transfer of ownership of the plant from Sinohydro to CELEC, set to take place at the end of 2022.

“We will not receive the plant until all the problems are resolved,” Uquillas said.

Separately, CELEC is investing some $100 million to protect Coca Codo Sinclair’s reservoir from the Coca River’s rapid erosion, which is threatening infrastructure in the region.