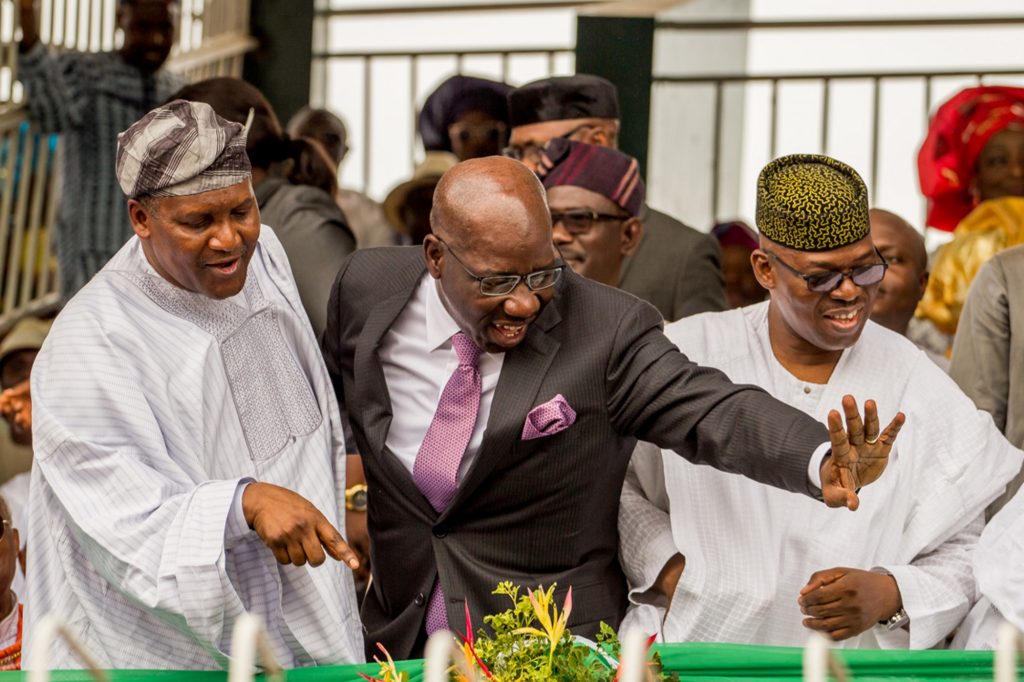 *Business mogul and Africa’s richest man, Alhaji Aliko Dangote points while Godwin Obaseki, waves to a mutual friend at his inauguration ceremony. Next to him is Segun Oni, former governor of Ekiti state.

05 January 2018, Sweetcrude, Abuja – The Edo State government on Thursday announced that the governor, Mr. Godwin Obaseki’s convoy was attacked by agents of Obu Cement Company, a subsidiary of the BUA Group.

In a statement released to correspondents, the spokesperson to the Governor, Mr. Crusoe Osagie, also said the Managing Director of BUA’s Obu Cement Company, Mr. Yusuf Binji, has been declared wanted over the attack.

Recall that BUA Group has been in a running battle with another cement manufacturer, Dangote Cement, over the ownership of a mining site in Okpella, Edo State with Dangote accusing BUA of lying over ownership of the site.

The Edo state government had in a reaction to this, issued a ‘stop work’ order and on Wednesday led security officials to the site to arrest two personnel of the company (BUA Group) for flouting the order and continuing work.

Mr. Crusoe quoted the police as saying that the attack on the governor was sponsored by Mr. Binji.

The statement reads, “The Nigeria Police have declared the Managing Director of BUA’s Obu Cement Company, Yusuf Binji, wanted over an attack on the convoy of the Edo State Governor, Godwin Obaseki.

In an earlier statement, the Edo government had accused BUA International Limited of contradicting itself with regards to the situation at Obu mine in the Okpella area of the state.

On Wednesday, Godwin Obaseki, governor of Edo, ordered the arrest of two employees of BUA over alleged violation of a ‘stop work order’.

The order was given following the dispute between Dangote Group and BUA. Both companies are laying claims to ownership of the site. But BUA alleged that the governor’s action was illegal.

Crusoe Osagie, the special adviser to the governor on media and communication, said government’s primary duty was to ensure peace in the state.

He said the government would ensure that the rule of law is upheld at all times.

He noted that “In the first paragraph of BUA’s statement, the company claimed that the Edo state governor effected a Gestapo-style to forcefully shut down the mine. In the very next paragraph, BUA said that ‘Upon reaching the mining site and not meeting any personnel or equipment two BUA Cement employees were invited to the mining site to receive the governor.

“Are these two statements not contradictory? If no one was at the site, then why would the governor use Gestapo-style to shut it down?

“So, why is BUA spreading falsehood? The workers and equipment were being evacuated by the time we got there, and understandably, they had heard that the governor was around and was rushing out of the site.

“They clearly flouted the stop work order and now want to mask their violation of the order by resorting to blackmail,” Osagie added.