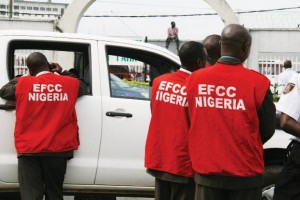 09 January 2015, Sweetcrude, Abuja – The Economic and Financial Crimes Commission (EFCC) on Thursday said it has smashed a syndicate of suspected fraudsters, who duped their victims over N300 million in cases involving different fake crude oil deals.

According to a statement from the EFCC made available to our correspondent in Abuja, two members of the syndicate, Michael Morowie and Emmanuel Owoicho, were in the custody of the commission explaining their involvement in the crude oil scam.

The EFCC spokesman, Wilson Uwujaren, stated that, “EFCC moved against the syndicate following complaints by victims who had been fleeced by the alleged fraudsters.

“An unsuspecting victim alleged that members of the syndicate collected N119m from him on the pretext of supplying him with two million barrels of Bonny Light crude oil. Eventually, the oil supply documents, which were purportedly obtained from the Nigeria National Petroleum Corporation, were found to be fake.”

He explained that in the course of investigation, operatives of the EFCC also quizzed one Samson Omobere of Etsam Oil and Gas Limited, who admitted to have collected the N119m from the complainant. The suspect alleged that he transferred a substantial part of the money to the Magnificent Marine Services Limited.

“This led to the arrest of one Michael Morowie, a director in the Magnificent Marine Services Limited, who allegedly withdrew over $358,000 and N11.7m from the company’s account under the names of Boma Harry, Peterson Harry and Elder Dan Jumbo,” Uwujaren said.

He added that four driving licences bearing his photograph under the name of Michael Morowei as well as several other scam documents were recovered from the suspect’s house.

The EFCC said another member of the syndicate also obtained N300,000 from another victim, a Kenyan citizen resident in Germany.

“The syndicate had sold the same dummy of supplying him with two million barrels of Bonny Light crude oil,” Uwujared said.

The EFCC spokesman added that the commission was investigating the syndicate for another alleged case of obtaining N102.8m from another complainant under the pretences of supplying him two million barrels of Bonny Light crude oil.

According to the anti-graft agency, one Emmanuel Owoicho of Owoema Resources Limited, confessed to have collected N15m from the complainant.

It added that Owoicho directed the complainant to pay the bulk money to some bank accounts, including Allen Logic Ways Unique Services Limited.

“Acting on this lead, the EFCC arrested one Michael Oghenemi.

“The EFCC also recovered the letterhead of Allen Logic Ways Unique Services, which was registered in the name of Pabor Wariowei, from his house.

“About N14m was transferred to Standard Allied Universal Concept registered by Fubara Jumbo, one of the pseudo names used by the suspects.They will be charged to court after investigation is concluded,” Uwujaren added.