12 April 2016, Sweetcrude, Abuja – The Economic and Financial Crimes Commission on Tuesday vowed to investigate some Nigerians named in the Panama Papers scandal that is currently rocking the civilised world. 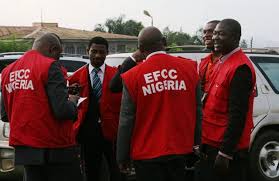 The Director of Information at the EFCC, Mr. Osita Nwajah, who stated this while addressing protesters who stormed the Abuja head office of the anti-graft agency to demand the probe of all Nigerians accused of operating offshore accounts in notorious tax havens, said the Commission was already studying the leaked reports to learn more about the extent of involvement of some Nigerians.

Nwajah said, “These papers (Panama Papers) did not emanate from Nigeria but they touch the lives of the people of Nigeria and corruption as well as money laundering have gone beyond national borders as we are seeing from these papers.

“The EFCC is not just a Nigerian organisation. The work that we do goes beyond national borders.
So this request will be looked into along with other requests by other well-meaning Nigerians along the already charted course of Mr. President which is zero tolerance to corruption, zero tolerance to impunity, zero tolerance to the abuse of public office and continued subjugation of the Nigerian people.”

Also addressing protesters, a former Minister of Education, Mrs. Oby Ezekwesili, said Nigeria must investigate all those mentioned in the Panama papers just as other developed countries were doing.

She said, “I want to add my voice to the voices of the members of civil society groups who are demanding that action be immediately taken by our government in initiating a process for further investigation of the allegations coming out of the Panama Paper leaks.

“It is a global leak and many countries are already using their domestic instruments to find out a lot more. In fact, in some of the countries, ahead of the facts being established or confirmed, some of the public officials are already resigning from their position.

“I think it is important to realise that the matter of operating offshore accounts in tax havens have been an issue which Transparency International, which I co-founded, has been on for many years.

“The reason we have the EFCC is that when things like this happen globally, and other nations are taking measures to determine how it affects them, our own EFCC, our own government, our own Ministry of Justice must show responsiveness. That is what responsive governance is all about.”

The Executive Director, African Network for Environment and Economic Justice, David Ugolor, who coordinated the protests, said the government must investigate all the accused persons as tax evasion is economic sabotage.

“Other governments are already responding. Ours must not be an exception and we thought that we must raise our voice to demand this,” he said.

The protesters also marched down to the Office of the Attorney-General to submit a petition demanding the probe of those mentioned in the Panama Papers.

A civil society organisation, Socio-Economic Rights and Accountability Project (SERAP), over the weekend asked the Chairman of the Code of Conduct Bureau (CCB), Mr. Sam Saba, to urgently investigate current and immediate past high-ranking public officers named in the Panama Papers scandal, including other prominent persons who are maintaining and operating or have maintained and operated foreign accounts in other safe havens and jurisdictions.

The organisation also urged Saba to, where appropriate, refer such officers to the Code of Conduct Tribunal (CCT) for prosecution.

SERAP made the demand in a letter dated April 8, 2016 and signed by its Executive Director, Adetokunbo Mumuni, which read in part: “SERAP believes that the Panama Papers have shown the extent to which public officers in the country are concealing their stolen wealth in safe havens and secrecy jurisdictions, contrary to the Code of Conduct for Public Officers which prohibits public officers from maintaining and operating foreign accounts.”

The organisation said, “We would be grateful if the Bureau could begin to take these steps within 14 days of the receipt and/or publication of this letter. If we have not heard from you by then as to the steps the bureau is taking to address the concerns raised in this letter, the registered trustees of SERAP shall take all appropriate legal actions to compel the bureau to effectively discharge its constitutional and statutory mandates in this instance.”

The group further said it hopes that the CCB will learn from the lessons of the Panama Papers to combat the abuse of the asset declaration requirements and not wait for further international disclosures that may implicate even more public officers in corruption and money laundering.

“SERAP argues that unless high-ranking public officers who use safe havens and secrecy jurisdictions to breach the fundamental requirements of asset declaration are sanctioned, named and shamed, the credibility of the asset declaration regime as a tool of preventing and combating corruption will continue to be doubted, and Nigerians will continue to witness climate of lack of transparency and widespread impunity of corrupt public officers in the country.

The leak of the Panama Papers details how political leaders and the wealthy, including Nigerians, conduct business behind a veil of secrecy.

The 11.5 million documents, held by Panama-based Monssack Fonseca, released to a German newspaper and the International Consortium of Investigative Journalists (ICIJ), have caused upheavals around the world.