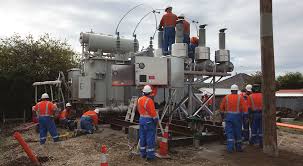 05 June 2018, Sweetcrude, Lagos — The Eko Electricity Distribution Company, has announced plans to build a new distribution injection sub-station of 2 x 2.5MVA bulk transformer capacity in the Surulere area of Lagos metropolis to boost power supply and distribution in the area.

Disclosing this to newsmen in Lagos was the company’s General Manager, Corporate Communications, Mr. Godwin Idemudia.

According to Mr. Idemudia, the site for the project, located at Mechanic Village, off Randle Avenue, was donated to the company by Lagos State Government through the state Ministry of Transport.

While thanking the state government for the good gesture, Mr. Idemudia said the new power project would lead to a tremendous turnaround in power supply in Surulere and environs as four new 11kv feeders would be created from the new substation.

The four 11kv feeders, he said would relieve some already overloaded feeders that have resulted in power rationing and intermittent outage in the area.

Describing the new project as one of the gains of collaboration and partnership between the company and Lagos State Government, Mr. Idemudia expressed gratitude to the state government for making the land for the project available adding that the company was looking forward to more of such mutually beneficial collaborations in the future.

While reiterating the company’s commitment to customer satisfaction and optimal service delivery at all times, the Eko Disco spokesman further disclosed that many more power improvement projects have been lined up for different parts of the company’s operational territory.