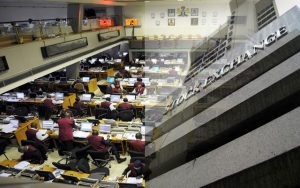 07 February 2019, Lagos — The volume of shares traded on the Nigerian Stock Exchange (NSE) in January dropped by 42.38 per cent due to uncertainties surrounding the forthcoming general elections, said analysts.

Specifically, 6.24 billion shares worth N59. 28 billion were exchanged in 80,888 deals by investors in January.

The News Agency of Nigeria (NAN) reports that the turnover and volume during the period dropped by 42.38 per cent and 16.16 per cent, respectively when compared with figures achieved in December 2018.

Data obtained by NAN from the exchange indicated that the financial services sector remained the most active in volume terms, accounting for 3.43 billion shares valued at N22.62 billion in 28,671 deals.

Transcorp listed under the conglomerates came third with a total of 288.76 million shares worth N334.33 million transacted in 2,476 deals, while UACN traded 21.09 million shares valued at N184.93 million achieved in 934 deals.

Mr Ambrose Omordion, the Chief Operating Officer, InvestData Ltd., attributed the drop in the activities of the stock market during the review period to cautious trading ahead of this month’s election.

Omordion said investors had developed a ‘wait and see attitude’ to ascertain the outcome of the election.

He, however, attributed dominance of Diamond Bank in the month’s activity chart to its proposed merger with Access Bank, saying the proposed merger boosted the demand for the bank’s shares.

According to him, the proposed merger entails that Access Bank acquires the entire issued share capital of Diamond Bank in exchange for a combination of cash and shares in Access Bank via a Scheme of Merger.