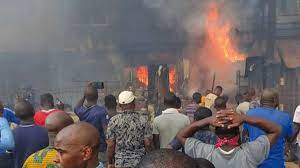 The fire occurred at Number 92 Ikwerre Road by Anozie Street Junction in Mile II, through sparks from the high-tension cables, when PHED restored power supply in the area yesterday.

An eyewitness, Ayo Biodun, said the fire started around 8pm in the night.

Biodun said it took prompt intervention of operatives of the state fire service to put out are fire, adding that no life was lost.

She added that operatives of the Nigerian Police Force were on ground to protect lives and properties.

“It was about 8pm when PHED brought light, then there were sparks from the high tension in front of a container shop close to the sports wears shop, the spark ignited the fire which trace the electricity wire connecting the shops.

“With the help of the fire service who came some minutes after the fire started, we were able to put off the fire with the assistance of the youths in the area, no life was lost.”