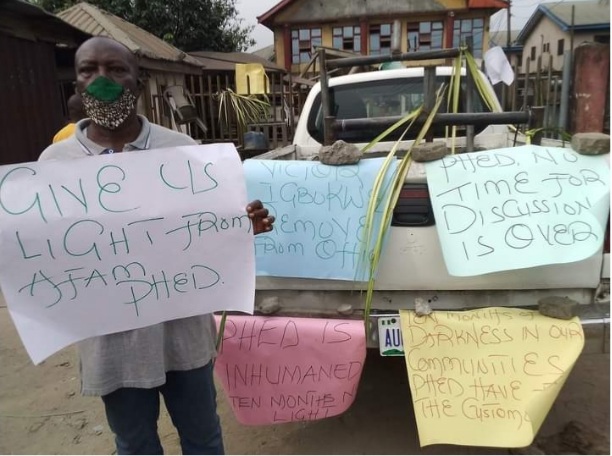 *One of the PHED customer

Port Harcourt — Electricity customers in Oyigbo and Etche Local Government Areas of Rivers State on Wednesday barricaded the entrance of the Port Harcourt Electricity Distribution Company in Oyigbo, in protest over 10 months of power outage in the area.

The protesters with fresh palm fronds and placards bearing different inscriptions, came from Komkom community in Oyigbo, Ikwerre engwo and Umuebule communities in Etche, for the protest.

Some inscriptions on their placards read, “give us light from Afam”, “PHED is inhuman over 10 months no light”, among others.

The protesters claimed that PHED took their power lines from Komkom feeder to Elelenwo feeder, demanding that the disco should restore their power to Komkom feeder, which according to them, was more reliable.

One of the protesters, who gave his name as Peter Chikaodili, said for over 10 months all the concerned communities have been without power supply.

Chikaodili threatened that they will continue to occupy PHED office in Oyigbo, until their power supply is connected back to Komkom feeder and power supply restored back to the affected areas unconditionally.

He explained that all the affected communities were major producers of gas, which is used in the generation of power at Afam power plants and other areas.

They protesters urged the management of PHED PHED to do the needful, in order to avoid breakdown of law and order in the area.

As at the time of filing this report, the management of PHED was yet to respond to the protest carried out by their customers in Oyigbo.