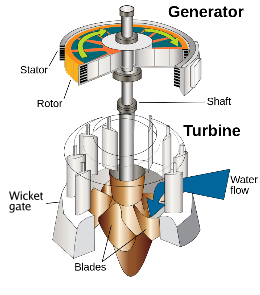 27 November 2015, Sweetcrude, Abuja – The National Agency for Science and Engineering Infrastructure, NASENI, has developed the propeller turbine technology for local power generation, part of its contribution to rural electrification in the country.

The turbine technology conceived and designed by engineers at the Engineering Materials Development Institute (EMDI), Akure, an institute under NASENI, has already been installed at Awara Dam, Ikare and Akoko North East Local Government Area of Ondo State.

Speaking during the commissioning, the executive vice chairman of NASENI, Prof. Mohammed Haruna, said the idea behind the propeller turbine technology model was to improvise where there were no waterfalls.

The technology, according to him, enables water to be controlled through certain channels to propel the turbines that will generate energies which will eventually be converted to power or electricity even if there are no heights.

He said, “It is a simple technology, easy to handle or maintain and it is appropriate for rural electrification or the actualisation of operation light up rural community project by the Federal Government.

A statement by the agency’s chief information officer, Mr Olusegun Ayeoyenikan, said the pilot project had proven that it is possible to convey water through normal flow in a pipe not requiring any height but only to control the volume and speed of water in any location inasmuch as you can control the water flow through a piping system or other channels that can make propellers work.

“We are happy about this project from its conception to execution and it is a call on governments in Nigeria to seize the opportunity of the technology to shore up power generation resource for the country,” he stated.