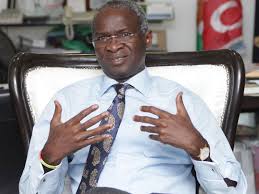 18 March 2018, Sweetcrude, Lagos — The Minister of Power, Works and Housing, Babatunde Fashola, has reiterated his intention to continue with implementation of the Eligible Customer Policy despite disapproval by the electricity distribution companies, DisCos.

In a statement by the minister at the 25th monthly power sector and operators meeting held in Uyo last week, Fashola said he had held meetings with Manufacturers Association of Nigeria, MAN, the DisCos and generation companies, GenCos on implementation of the policy.

“While it is no longer news that we have reached a 7,000 MW Generation Capacity and have a 5,000 MW Distribution Capacity, what is newsworthy is that in the last month, we have met with Manufacturers Association of Nigeria (MAN), DisCos, and GenCos on how to implement the Eligible Customer Policy and increase connectivity to the 2,000 MW that is available”.

According to him, the meeting was “productive” “

“…We are seeing positive responses”.

“Reports reaching me indicate that what is outstanding is an agreement on the tariffs that will be paid by the eligible customer”, he said.

“In many parts of the country connected to the grid, citizen feedback is positive, even though all the problems are not solved. Citizens acknowledge more power in dry weather, reduced hours of running their generators and reduction in fuel (diesel and petrol) purchase to power generators”, he added.

Fashola had on May 15, 2017, declared four categories of eligible customers in the Nigerian Electricity Supply Industry, NESI.

However, the move was met with kickbacks from the DisCos who felt they were being shortchanged by such policy, arguing that the eligible customer regime was not part of their contract agreement upon privatisation, leading to the distribution companies declaring a force majeure.

The eligible customer policy has since been upheld by the Nigerian Electricity Regulatory Commission, NERC.