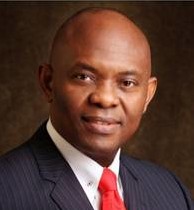 15 February 2017, Lagos –The African Finance Corporation, a pan-African multilateral development finance institution and project developer, has announced that a non-executive director, Mr. Tony Elumelu, has decided to retire from its board after nine years of meritorious service.

A statement obtained on Tuesday said Elumelu was a founding director and the first chairman of the corporation’s Risk and Investment Committee, which he chaired for nine years.

Elumelu, who is the Chairman of Heirs Holdings, represented United Bank for Africa Plc. He is succeeded by the Deputy Managing Director of UBA, Mr. Victor Osadolor.

The Chairman, AFC, Dr. Sarah Alade, said, “I am grateful for the notable contribution that Mr. Elumelu has made throughout the nine years he has served on the board of AFC. I would like to thank him for his expertise and judgement, and for pioneering and chairing the board’ Risk Investment Committee.

“Mr. Elumelu’s contribution has helped AFC to build our portfolio of investments that are supporting African economies to grow and diversify.”

Established in 2007 to be the catalyst for private sector infrastructure investment across Africa, the statement said AFC was now the second highest investment grade rated multilateral financial institution in Africa with an A3/P2 (stable outlook) rating from Moody’s Investors Service.