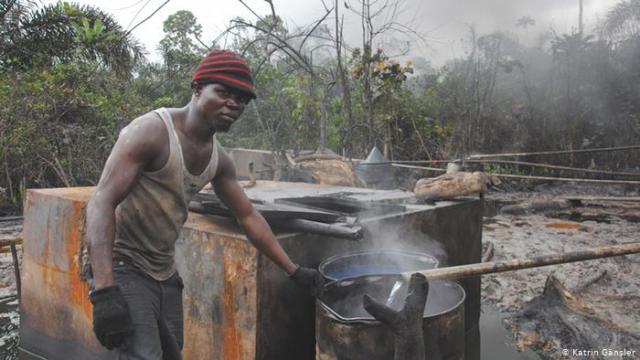 Port Harcourt — The Federal Government should encourage the local technology of artisanal refineries and refiners in the Niger Delta, by modernising their operations for adoption as a national policy, an environmental justice activist has advocated

The environmentalist said this in reaction to the report from Stakeholder Democracy Network, SDN, that petroleum products such as PMS, DPK and AGO refined by Niger Delta artisanal refiners popularly called “Kpofire” are of higher quality, than those imported into the country.

SDN had announced that 91 samples of diesel, gasoline and kerosene were taken from filling stations and artisanal refineries in Rivers, Bayelsa and Lagos states to world class laboratories in the United Kingdom for analysis.

Samples of artisanal diesel were reported as having sulphur levels of 1,523 parts per million, while samples from imported products contained up to 3,020ppm of sulphur, said SDN’s Calvin Laing.

Reacting to the report, Environmental Justice Activist and Executive Director of Youths and Environmental Advocacy Centre, YEAC, Mr. Fyneface Dumnamene Fyneface, explained that he was aware that artisanal refined petroleum products were in high demand, though he never knew it was because of its high quality.

The environmentalist who described the report by SDN as shocking and surprising revelation, urged the Federal Government to speed up the process of modular refinery licensing, which was promised the youths of the Niger Delta region by the government.

He explained that artisanal refining if properly done under government’s regulations, would create jobs and also save the government from wasting foreign exchange in importing refined products.

“As an Environmentalist who has been researching on artisanal refineries, engaging and training artisanal refiners in the Niger Delta to embrace modular refinery promised by the Federal Government, I know their products are in high demand by motorists, industries and even by vessel operators, but didn’t know the high demand for these illegal refinery products was because of their higher quality till this SDN report.

“These findings also implies that the Nigeria regulatory agencies have failed in their responsibilities of checking the quality of petroleum products imported into the country and protection gullible consumers.

“The fuel subsidy regime in the countries which had been a major source of corruption also made importers of petroleum products into the country to be desperate to the extend that they could mix quality products with byproducts like condensate at country of origin, pump into vessels, transported to Nigeria for NNPC to subsidize and pump to the public without any quality checks.

“This report should serve as an eye-opener for the federal government and our regulatory agencies to check and test petroleum products imported into the country.

“On the other hand, the Federal government should also encourage the local technology of artisanal refineries and refiners in the Niger Delta region by modernizing their operations for adoption as a national policy.

“The Federal government should also speed up the process of modular refinery licenses promised youths in the Niger Delta which Advocacy Centre had started registering and grouping them into cooperative society as directed by President Muhammadu Buhari on January 10, 2020 in Port Harcourt during the inauguration of NOSDRA Laboratory.

“These measures would go along way to create jobs for our youths and safe our depleting foreign exchange from dwindling oil prices in the international market due to COVID-19 Pandemic and also make artisanal Refinery products that had been proven by this report to be of higher quality to be legally available in our local energy markets.”