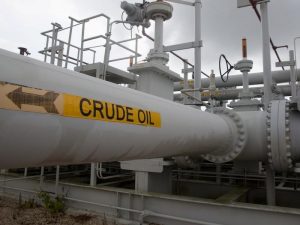 A maze of crude oil pipes and valves. REUTERS/Richard Carson

The new report released by the company, and quoted by Rigzone, said global oil demand grew by 1.7 percent in 2017.

Eni’s 17th edition of the World Oil, Gas and Renewables Review showed that global oil demand grew by 1.2 percent in 2016.

World oil production in 2017 grew by 0.3 percent, said the report, which revealed that the US and Canada set the biggest increases outside the Organization of the Petroleum Exporting Countries, OPEC.

“OPEC’s production, on the other hand, has declined following the cuts policy and the crisis in Venezuela,” Eni said in a statement accompanying the release of the report.

The report also outlined that oil reserves decreased by 0.2 percent in 2017 and that OPEC remained the biggest reserves holder, with 72 percent of the world’s total.