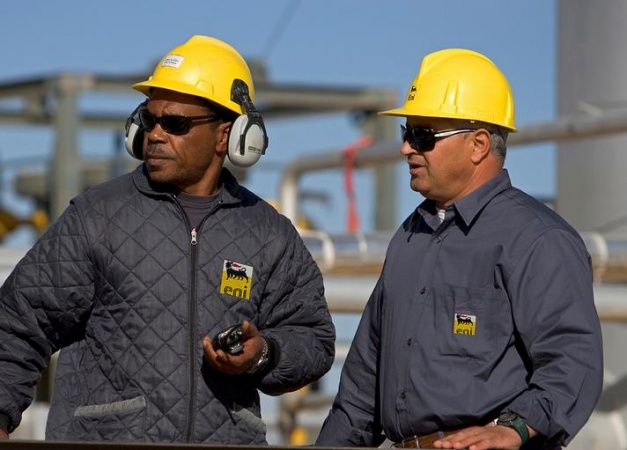 *Eni personnel at the Brass terminal

Lagos — Parent company of Nigerian Agip Oil Company, NAOC, Eni has said the force majeure on Brass terminal, Bonny NLNG and Okpai Power Plant will be lifted by this week.

A statement by the company on Tuesday, said repairs on the Ogoda/Brass 24″ oil pipeline in Okparatubo, Nembe Local Government Area, Bayelsa State, which was hit by a blast on March 5, has been completed.

The company had blamed cause of the leak on third-party interference.

“The force majeure is expected to be lifted by this week”, the statement read.

“All wells conferring in that pipeline were immediately shut-in whilst river booms and containment barges were mobilized to reduce the impact of the spill. Regulators for inspection visit and repair teams have also been activated.

“State and Federal Government and Security authorities were notified”.

Deferred production was estimated at 25 kbopd oil and about 13 MSm3/d gas.

This is the second blast in the area in a few days.

Former event occurred on a riser of Obama/Brass 18″ oil line on 28th February and caused a production deferment of about 5,000 bopd for a few days.

The unfortunate incident occurred at a time when not fewer than 14 power plants have been in a limbo state for over two months, and reports of national grid collapses did the rounds, plunging the country into power outages.

As a result, Abubakar Aliyu, Minister for Power, had called for an emergency meeting with power generation companies, Transmission Company of Nigeria, TCN, Distribution Companies, DisCos and other stakeholders in a bid to address the crisis.

The meeting which was held in Abuja on Monday amid blame trading among TCN, DisCos and GenCos, saw the minister telling all in attendance to work together to make electricity more stable.

Others at the meeting include the Nigerian Bulk Electricity’s Trading, NBET, the Niger Delta Power Holding Company, NDPHC, Nigerian National Petroleum Corporation, NNPC, Shell and others in the power value chain.