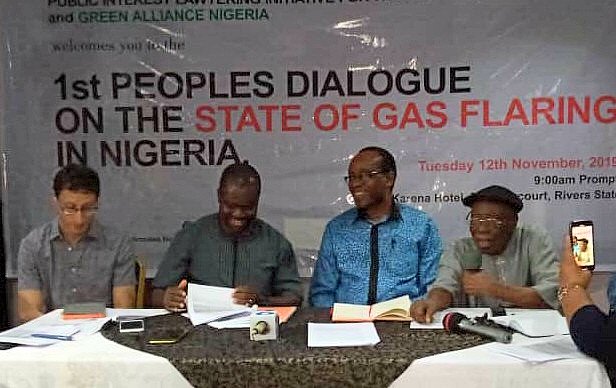 *Environmentalists at the 1st Peoples’ Dialogue on Gas Flaring.

Port Harcourt — Environmental rights activists in the country on Tuesday charged the Federal Government to ensure the installation of meters in every oil and gas production facilities, in order to ascertain the quantity of gas produced and flared by oil companies.

Speaking in Port Harcourt, at the 1st Peoples’ Dialogue on the State of Gas Flaring in Nigeria, organised by Chima Williams and Associates, the environmentalists urged the Federal Government to make it a policy that oil companies who flare gas, are made to pay the commercial value of the gas flared.

Director, Health of Mother Earth Foundation, Dr Nnimmo Bassey, decried that Nigeria has not been able to quantify to volume of gas produced and flared, just like the government doesn’t know the quantity of oil produced, except the data given by the oil companies.

Bassey, called on the federal government to ensure oil firms in the country install meters in every oil and gas production facilities, in order to ascertain the quantity of gas produced and flared, so they can pay for any amount of gas flared into the environment.

He lamented that gas flaring has been lingering problem in the country since 1956 up till now, with no serious intention to end it in country.

“For companies to flare gas, they should pay the commercial value of that gas, then they can flare it.

“To know the volume of gas being extracted and flared in Nigeria, we need the federal government to sit up and insist that there is proper metering in the oil and gas fields, so we can know what we are talking about, so that anyone who flares gas would pay for the commercial quantity of what is being flared.

“Knowing how much gas flared is simply to install all the metres and the oil and gas exploration companies have been resisting this according to what we heard from the Department of Petroleum Resources.”

For his part, Convener of the event, Chima Williams and Associate, recalled that during the 2016 United Nations Climate Change Conference in Morocco, President Buhari stated that the federal government will end gas flaring in 2020.

Williams stated that the reason for the meeting was to bring together different actors on the issue of gas flaring, to tackle the issue and unanimously influence the government to within the ambit of the law end the gas flare in Nigeria.

“One of the reasons for this dialogue, is to tell President Buhari to remember the actions he took as a military head of state to end gas flaring, because he understood the importance of ending gas flaring in Nigeria, now that he is a civilian president, he is more responsible to Nigerians who elected him.

“I believe that the President was honest when he made that promise in Marrakech, Morocco in November 2016 that the government would do everything within its power to end gas flaring in 2020. We want to remind him and equally ask him to fulfill that promise.

Williams, expressed optimism that ending gas flaring was achievable specially as the Minister of State for Petroleum was from the south-south region which was adversely affected by the effects of gas flaring.

“Again, we have a son of the soil as minister of state, Petroleum, who knows a lot about the impacts of gas flaring in our communities, because he sees them even in his own community, to help talk to mr president to do everything to end it.

“This is also a clarion call for us to mobilise our voices to support mr president and his government to end gas flaring even this year, it is doable with technology, it only needs somebody to push these oil companies to be willing to do it.”