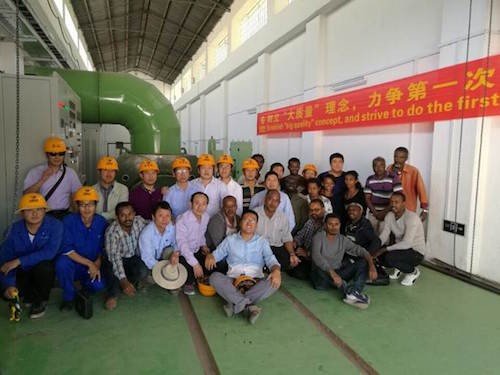 09 June 2018, Addis Ababa — The secret of the economic and holistic development of prosperous countries of the world is their energy production and consumption which has, in turn, accelerated the industrialization processes.

And the ultimate end of the production and consumption is obvious–awarding citizens with a better standard of living.

From all the basic infrastructure developments, energy, therefore, should come top in the list. And among all the sources of energy, hydropower is the natural gift that also helps to protect nature itself in enhancing its originality.

Ethiopia started to eye on hydro-power development centuries ago, since the time of Emperor Menelik II, then for purposes of domestic uses in and around the palace.

But it was an 1898 German Government’s gift, modern diesel generator, which replaced the use of firewood and taper as a source of light in the palace.

Then the emperor understood that electric light is not only comfortable but it also betters off life, and eventually decided as it should be accessible to the general public. Of which a project had born, the nation’s first hydropower plant, Aba Samuel Power Production Center that took shape at River Akaki. It began power production in 1904. As a result, the community that surrounded the palace got electric light.

Developing countries like Ethiopia use the electric energy sources like water, wind farm sunlight and geothermal while developed ones nuclear and other energy sources.

The subsequent governments’ investment in hydropower was used both for domestic consumption and for industrialization efforts. But, the energy production growth had not been that dramatic compared to the country’s potential.

Over the last decade, however, the government decided to transform the energy production, this time it takes into consideration all domestic use, industrialization and export.

In the processes, the Ethiopian Electric Power has played a great role. It has been constructing power plants, distribution centres and transmission lines with special attention ever given to the sector.

The energy production which stood at 370 MW two decades and plus years ago has now grown by many folds. Currently, the country generates 4260 MW using water, wind and geothermal sources–all clean and renewable sources.

Despite a huge leapfrogging, still the generation is far behind the countries potentials–as studies show, the nation has about 50, 000 MW hydropower, 1.3 million MW wind electricity and 10,000 MW geothermal energy sources and — solar.

In addition to this, the nation is constructing grand electric power production projects. Among these, the Grand Renaissance Dam Project which is expected to generate over 6,450 MW hydropower takes the lead not only in the country and continent but also being the sixth in the world. Koyisha Hydropower Generation Project is also a grand project which is under construction to enable the nation harvest over 2100 MW hydroelectricity.

Besides their energy production, these projects are enabling the local professionals to acquire skills and copy technology of the sector as they are working collaboratively with the foreign contractors. In different words, they are empowering the internal capacity and serving as capacity building to enable the nation confident to construct other projects by local professionals.

These all planned projects are believed to raise the energy generation capacity to 17, 000 MW at their completion. And according to the report of the Ethiopian Electric Power, all the necessary prerequisites of the construction of the projects are well in progress and the stakeholders are playing their roles to realize the projects.

Besides satisfying the internal energy consumption, the nation has also been striving to export energy, especially hydropower, to the neighbouring countries. Djibouti, Sudan and Kenya are already made the beneficiaries of the natural energy resource of their good neighbour. In the last nine months alone, Ethiopia exported over 160 MW to the countries and collected over 50 million USD.

The other developing neighbouring countries like Somalia, Somaliland, Rwanda, Uganda, Tanzania and South Sudan have as well are on the way to purchase power from Ethiopia.

Therefore, the hydropower supply to the region is the other opportunity that is initiating Ethiopia to emphasize on the power generation besides the industrialization process to bring forth the renewed nation.