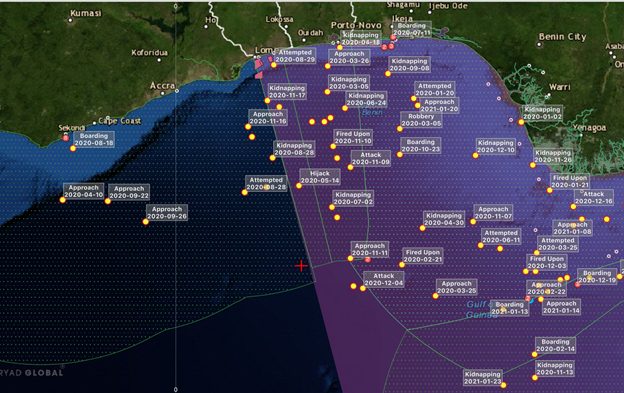 Illegal boarding incidents in the Gulf of Guinea

Lagos — After all efforts by governments around the Gulf of Guinea (GoG) to stop piracy, kidnapping for ransom and organised crime failed, the European Union (EU) has announced the launch of the pilot case of the Coordinated Maritime Presences (CMP) concept in the vast area.

This was contained in a document containing the outcome of proceedings approved by the European Union Council at its meeting held on 25 January 2021.

The Nigerian Maritime Administration and Safety Agency (NIMASA) had in 2019 hosted about 30 countries at the Global Maritime Security Conference.The high-level maritime security conference was meant to facilitate a clearer understanding of the challenges of maritime security in the Gulf of Guinea region and develop tailored solutions.

However, two years down the line, this has not translated into safer maritime environment in the region.
According to the document, the EU said it would henceforth ensure political control and provide strategic guidance West and Central African States in an effort to address the many challenges to maritime security, including organised crime.

Specifically, it stated, “The West and Central African States, which bear the primary responsibility for combating maritime crime in the region, made political commitments already in June 2013 in the Code of Conduct concerning the repression of piracy, armed robbery against ships, and illicit maritime activity in West and Central Africa.
These commitments have been pivotal in the progressive establishment of the Yaoundé Architecture’ to improve coordination and cooperation on maritime security.

Nevertheless, the Gulf of Guinea continues to face a challenging environment in which piracy, armed robbery at sea, kidnapping of seafarers, illegal, unreported, and unregulated (IUU) fishing, smuggling and trafficking of drugs and arms, as well as transnational organised crime pose a major and increasing threat to maritime security, affecting freedom of navigation, thus endangering major trade routes, jeopardising the sustainable development of the entire region and the economic livelihood of the population, and leading to the deterioration of the environment and biodiversity.”

Also, the EU affirmed its commitment to increasing work with the coastal states of the Gulf of Guinea and the organisations of the Yaoundé Architecture, through greater European operational engagement, by also ensuring continuity, reactiveness, complementarity and synergy between Members States’ actions.

“While being distinct from the CSDP missions and operations, the pilot case of this new EU initiative, reflecting the Union’s growing role as a maritime security provider, can provide a substantial contribution to addressing the security challenges in the Gulf of Guinea.

“In this regard, the pilot case of the CMP should allow the EU to: enhance the visibility of EU maritime presence and support the Union’s strategic and political objectives, including conflict prevention, in close cooperation with international and regional partners, promote international cooperation at sea, in line with international law and UNCLOS in particular, and the exchange of information in the maritime security domain in specific areas and use the CMP as a pragmatic maritime tool as part of the EU’s Integrated Approach,” it said.

The EU added, “In this framework, the Council: establishes the Gulf of Guinea as a Maritime Area of Interest (MAI) and welcomes the establishment of the Maritime Area of Interest Coordination Cell (MAICC); recognises the importance for the Member States to further improve the coordination of actions carried out by their assets deployed in the MAI under national command, on a voluntary basis.