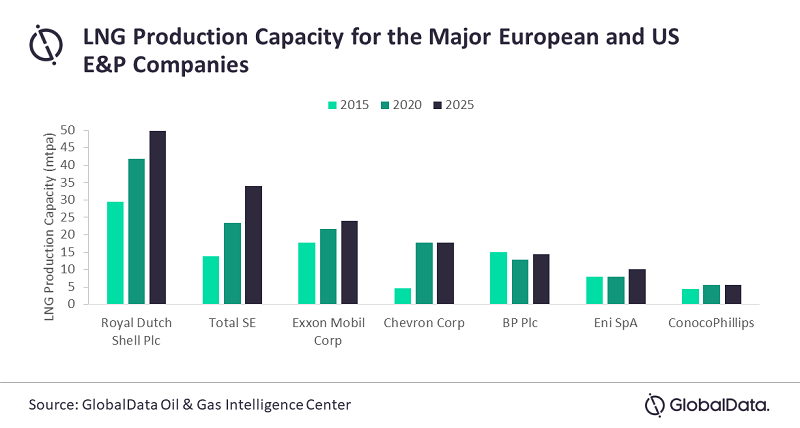 “Ras Laffan will boast a production capacity of 32 mtpa by 2025, which alone is forecast to account for 6% of the active global capacity that year. Majors from both sides of the pond have competing projects vying for FID that are set to start-up in the latter half of the decade, but in the shorter-term, the European majors have secured the greatest capacity growth,” Joseph Wisdom, Oil & Gas analyst at GlobalData, comments.

Demand for gas could increase faster than anticipated, however, with many countries looking to reduce carbon emissions.
As a transitional energy source, gas supports the expansion of renewables and issues related to energy intermittency. Furthermore, the Euro majors have successfully achieved green-LNG deliveries, which has seen the first carbon-neutral LNG cargoes by Shell and Total. This nascent trend is likely to become more popular among sellers looking to appeal to nations with stricter emissions targets, such as Europe.

Wisdom continues: “Shell currently boasts the largest LNG portfolio of both European and US majors and continues to undergo strong growth. Through leveraging third party supply the company can even be competitive with Qatar Petroleum in terms of total LNG supply. Shell has a strong LNG pipeline with its sanctioning of LNG Canada, and expansions in Nigeria and Oman. Despite its intention to sell its stake in the Abadi LNG project, the company is forecast to retain its top spot among the majors.

“While Shell and Total are expected to see substantial developments to their LNG portfolios, Exxon and Chevron lack the short to medium-term prospects. In the latter half of the decade, Exxon have some notable projects such as Rovuma and Far East, which if they manage to take FID, could see them reach levels competitive with Total and Shell in terms of LNG production.”