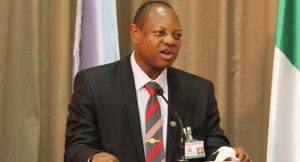 02 November 2017, Sweetcrude, Port Harcourt – Ex-militants in the Niger Delta have charged the Vice President,  Prof.  Yemi Osinbajo, and the National Assembly to prevail on the Special Adviser to the President on Niger Delta Amnesty Programme, to ensure the payment of their unpaid allowance in the last two years.

The ex-agitators in a letter to the Vice President, made available to journalists in Port Harcourt, alleged that the Amnesty Office led by Brigadier General Paul Boroh (Rtd) has refused to pay them their monthly stipends since October 2015 till date.
The letter signed by one Mr. Ikemini Markson, on behalf of 56  former Niger Delta agitators, said they were the first batch of the Federal Government Amnesty Programme,  and wondered why government, suddenly stopped their payments.
Markson warned that failure of Federal Government to restore their names in the programme and continue the payment, would  have unfavourable consequences in the region and the country at large.
He claimed that there were over 300 ex-agitators who have not received payment of their allowance, saying that they had been exposed to unbearable hardship and dehumanization.
The letter read, “It is pertinent to note that, we are the rightful beneficiaries of the Federal Government Amnesty Programme’s first batch as captured in the original biometric compilation since its inception in 2009, and recipients of the Programme’s monthly stipends up until October 2015, when our payments were abruptly halted and our names surreptitiously removed.
“It is with utmost pain, but with the greatest sense of responsibility and respect for law and order,  that we write this humble letter to you. We are beneficiaries of the late president Umaru Musa Yar’ Adua Presidential Amnesty Programme, we are using this medium to inform you of the irregularities and corruption that has eaten up the vision of our late President, Umaru Musa Yar ‘Adua”.
It added, “Despite all measures to amicably settle this issue through several letters written to the office of the Special Adviser to the President on Amnesty Programme, our members have still remained unpaid till this very moment culminating in over two years of strife, hardship and penury, capable of pushing us into unwholesome practices long forgotten and abandoned by us.
“Our instant burden stems from the cries of woes occasioned upon over 300 members of us, of which only 56 beneficiaries are courageous to defend and fight for our rights.
“The 56 of us are not just ordinary Nigerians; we are, as it were, youths struggling to out-live environmental, social and political despoliation, degradation and other denials emanating from the operations of the extractive industries and multinational oil and gas conglomerates, who have taken over the Niger Delta land, waters and air through activities of flow stations, pipe linings, spillages and gas flares.  All of which will not know anything close to abatement soon. Undoubtedly, life is certainly unbearably short and brutal for all of us already”,  Markson stated.
The ex-militants warned that, “It is, therefore, a matter of urgent national importance that you intervene expeditiously before this drum full of gunpowder, blows up to cause mayhem to our Niger Delta and nation more pains.
“We, therefore, on behalf of our members, urge you to use your good office to speedily intervene in this deplorable situation and ensure the prompt payment of our outstanding monthly stipends and restoration of our names back to the Amnesty programme by directing the office of the Special Adviser on Amnesty as soon as possible, as we are also open for negotiation and peace.”