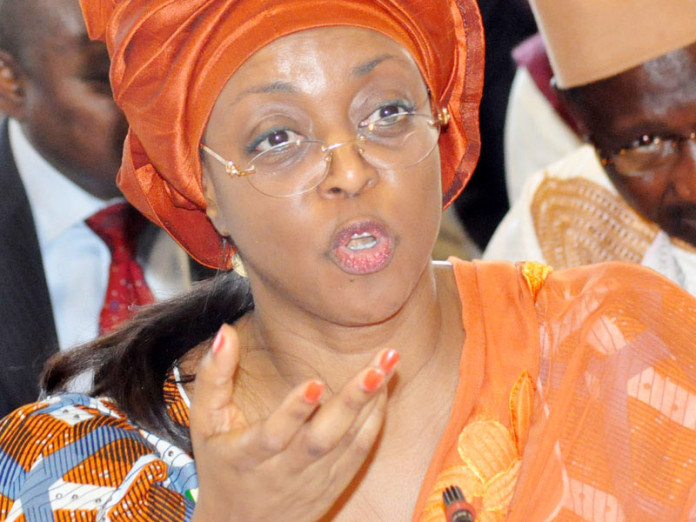 07 December 2017, Sweetcrude, Abuja – The Economic and Financial Crimes Commission (EFCC) has described how the former minister of Petroleum Resources, Mrs. Diezani Alison-Madueke used fictitious names to divert billions of naira from the ministry she oversaw.

Alison-Madueke, who served under former president Goodluck Jonathan until 2015, is at the centre of money laundering and bribery inquiries in several countries.

She was arrested in London in October 2015 as part of a British investigation into international corruption and remains on bail.

A Lagos Division of the Federal High Court had on Tuesday ordered a temporary forfeiture of the properties valued at $4.7 million (about N1.5 billion) allegedly belonging to Mrs. Alison-Madueke.

The two multi-million-dollar penthouses belonging to Nigeria’s former oil minister was seized as part of corruption investigations. The EFCC investigation is seeking to determine whether they were bought with the proceeds of crime.

The judge, Mrs. Mojisola Olatoregun, ruled that the properties – Penthouse 21 building 5, Block C, 11th floor (Bella Vista Estate) Banana Island, Ikoyi, and Penthouse 22, Block B (Admiralty Estate) also in Ikoyi, Lagos, be forfeited to the Federal Government pending the conclusion of investigation by the EFCC into the ownership of the properties which it reasonably believes were procured with proceeds of crime.

The judge’s decision came months after multi-billion naira properties and funds running into millions of dollars allegedly linked to the former minister were forfeited to the Nigerian government.

On August 7, a federal judge ordered the permanent forfeiture of a $37.5 million property on Banana Island, Lagos, allegedly belonging to Mrs. Alison-Madueke.

Two weeks later, another court ordered an interim forfeiture of 56 houses valued at over N3 billion allegedly bought by the former minister between 2011 and 2013.

On August 28, a judge ordered the permanent forfeiture of N7.6 billion suspected to belong to the ex-minister.
In September, there was another forfeiture proceeding on four properties in Lagos, Abuja, and Rivers State involving Mrs. Alison-Madeke.

In the latest ex-parte application for the forfeiture of two properties, the EFCC listed Mrs. Alison-Madueke, Donald Amagbo, Schillenburg LLC, and Sequoyah Property Limited, as respondents.

Anselm Ozioko, the EFCC counsel, also asked the court for an order prohibiting any disposal, conveyance, mortgage, lease or sale of the properties as well as an order authorising the commission to appoint a competent person or firm to manage them.

Alison-Madueke has previously had several homes and apartments seized by court orders. In October, she lost properties in Lagos, Abuja and Port Harcourt valued at 2.6 billion Naira ($7.2 million).

They were bought through front companies linked to her and her cousin, Donald Chidi Amamgbo.

He has told the EFCC the companies had been registered to hold property on behalf of Alison-Madueke, who was the first female president of OPEC.

In August, a judge ordered the confiscation of Alison-Madueke’s $37 million luxury apartment complex on Banana Island.

In the latest case, Amamgbo is listed as a respondent with Alison-Madeueke and two companies said to own the luxury penthouses. Amamgbo owned one of the firms.

In an affidavit deposed to by an EFCC investigator, Abdulrasheed Bawa, the commission stated that during investigation into the ownership of the two properties, YF Construction Development and Real Estate Limited, a certain Fadi Basbous, volunteered an extra-judicial statement where he stated that the two properties were sold at $3.570 million and $1.194 million, and owned by Sequoyah Properties Limited and Schillenburg LLC.

The deponent said payments for the two properties were made by Angela Jide-Jones, the wife of Jide Omokore, a close ally of Mrs. Alison-Madueke, and Atlantic Energy Drilling Concept Limited, a company registered by Mr. Omokore.

After payments, Mr. Omokore was said to have directed the sellers to sign agreements with Schillenburg LLC and Sequoyah Properties Limited, both of which are also linked to Mrs. Alison-Madueke.

The EFCC investigator also stated that Schillenburg LLC was registered in Hongkong and transferred on March 30, 2012, to Mr. Amamgbo as sole owner, while Sequoyah Properties Limited was registered in Nigeria on October 11, 2011, with fictitious names of Chukwudima Nwako and Olisa Eloka as shareholders and directors.

Mr. Amamgbo in his extrajudicial statement to the EFCC was said to have stated that he incorporated Schillenburg LLC and submitted same to Mrs. Alison-Madueke for the transaction.

After listening to the EFCC lawyer, the judge granted the application that the two properties be temporarily forfeited to the Nigerian government.

The judge, however, refused to grant the order authorising the anti-graft agency to appoint a competent person or firm to manage the two properties.