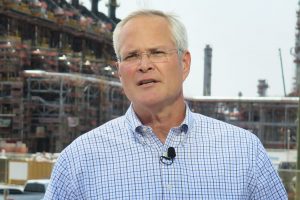 06 March 2019, New York — Exxon Mobil Corp said on Wednesday it plans to open its wallet and boost spending for several years to restore flagging oil and gas production, but its shares fell as investors were disappointed that the oil company would not tighten spending and send more money back to shareholders.

Exxon shares fell 1.9 percent in early morning trading to $78.43 after Chief Executive Officer Darren Woods defended Exxon’s plan to spend $33 billion to $35 billion next year, up 10 to 17 percent from $30 billion this year.

He said the strategy was to be “leaning in as our competitors are leaning back.”

Woods has been under pressure to rein in expenses and boost a share price that has barely increased in the past seven years.

“With investors increasingly pressuring energy companies to return cash to shareholders, it is no surprise that the higher capital budget was not positively received by the market,” said Muhammed Ghulam, analyst with Raymond James.

Woods told the company’s annual meeting for securities analysts that global demand is rising for oil and gas, and that the declining output of existing wells must be replaced.

“This is a compelling case for industry as a whole,” Woods said.

Exxon has laid out aggressive development plans to reverse a dip in production. The company has posted lower output in nine of the last 10 quarters, and has placed one of its biggest bets on shale oil from the Permian Basin in Texas and New Mexico.

Exxon said it expects production from the Permian Basin to rise to 1 million barrels of oil and gas per day as early as 2024. Woods said Exxon can earn a double-digit return in the Permian even at $35-per-barrel oil, and has the advantage of size, access to capital and better technology than its rivals.

Other major investments include offshore projects in Brazil and in Guyana, where it has discovered 5.5 billion barrels of oil, and global investments in liquified natural gas.

Exxon forecast capital spending of $30 billion to $35 billion each year from 2021 to 2025. Its plans for more than two-dozen global investments contrast with the strategy of most of its rivals, which are making more modest investments in new production while tightening spending and increasing stock buybacks and dividends.

Exxon also responded to investor calls for it to trim some of holdings, saying it would divest $15 billion in holdings over the next three years.

The success of Exxon’s pitch to analysts and investors “is likely to depend on whether Exxon can convince the market that higher spending today translates to higher returns to shareholders over time, and in the near term this could be helped by ramping up asset sales,” said Biraj Borkhataria, analyst with RBC Europe Limited in a note to clients.

The company said it expects annual cash flow from operations to reach $60 billion in 2025, on assumption of $60 per barrel international oil prices.

Analysts and investors have pressured Exxon to be more open and transparent, and Woods opened Wednesday’s analyst meeting by saying he had spent “quite a bit of time engaging with our shareholders,” in the last year. He said the company was releasing more information than it has historically.

Woods also joined the fourth-quarter 2018 conference call to discuss quarterly results with analysts. It was the first time he had done that.

The entire oil industry is out of favor and for years has underperformed other industrial sectors along with the S&P 500.

“This is an industry that a lot of investors hate, whether it’s environmental or track record,” said Brian Youngberg, analyst with Edward Jones. “The general investor is sick of the cyclicality.”