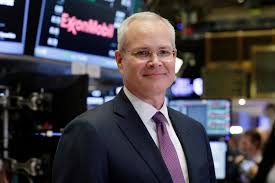 Lagos — ExxonMobil Corp. has confirmed plans to lay off an unspecified number of employees following global speculations few weeks ago.

Its Chief Executive Officer Darren Woods said in an email to staff that the decision was as a result continuous low oil prices.

“These are difficult times,” Woods said in the message, the text of which was released by the company Wednesday. “We are making tough decisions, some of which will result in friends and colleagues leaving the company.”

Woods also defended fossil fuels, calling them a “higher purpose” that aids global prosperity at a time when European peers are looking at renewables as the future, according to a report by Reuters.

However, he was clear that the layoffs are not a sign that his faith in oil and gas is in any way diminished.

“Fossil fuels will remain about half of the global energy mix by 2040 and often provide the most cost-effective pathway to development in poor countries, especially those in Africa and Asia”, he said.

“We often talk of companies having a higher purpose,” he said. “Well, I can think of no higher purpose than helping people and communities around the world grow in prosperity and achieve their aspirations for a better life through affordable energy.”

“Today’s alternatives don’t consistently offer the energy density, scale, transportability, availability — and most importantly — the affordability required to be widely accepted,” he said, adding that significant investments are needed by oil and gas companies such as Exxon to meet projected long-term consumption.

“This is a compelling investment case for the industry and our company — and is foundational to our long term strategies and plans”.