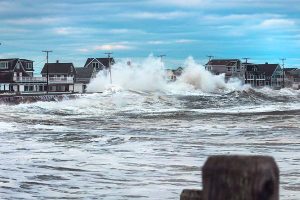 London — Climate change will put three times more people at risk of coastal flooding by 2050 than previously thought, according to a study published on Tuesday, with swathes of Asia and cities in North America and Europe all vulnerable to rising seas.

The research by Climate Central, a U.S.-based non-profit climate science and news organisation, underscored the scale of the upheaval projected to unfold as global warming increasingly threatens some of the world’s most densely-populated regions.

The study found that 300 million people are now living on land that is likely to flood at least once a year on average by mid-century without adequate sea defences, even if governments manage to make sharp cuts in emissions.

Earlier estimates had put that figure at about 80 million. China, Bangladesh, India and Vietnam account for the bulk of the at-risk population.

The authors said they had used artificial intelligence to correct systematic errors in a previous dataset that had suggested many inhabited coastal zones were at higher elevations — and thus safer — than they actually are.

“We now understand that the threat from sea-level rise and coastal flooding is far greater than we previously thought,” said Benjamin Strauss, chief executive of Climate Central and co-author of the three-year study.

“It’s also true that the benefits from cutting climate pollution are far greater than we previously thought – this changes the whole benefit-cost equation,” Strauss told Reuters.

The threat that advancing seas will overwhelm the ability of countries to build coastal defences and force many millions of people to migrate has long been regarded as one of the most potentially destabilising impacts of the climate crisis.

The risks were underlined last month when the U.N.-backed Intergovernmental Panel on Climate Change released a landmark report on oceans that said sea levels could rise by one metre (3.3 ft) by 2100 — ten times the rate in the 20th century — if carbon emissions keep climbing.

Even if governments manage some curbs on emissions, the new study, published in Nature Communications, said that about 237 million people spread across China, Bangladesh, India, Vietnam, Indonesia, and Thailand are likely to face annual flooding by mid-century, unless they establish adequate sea defences.

By 2100, if emissions continue unchecked, and ice sheets rapidly disintegrate, then land where 250 million people now live in those six countries will fall below the waterline at high tide — putting almost five times more people at risk than assessments based on previous elevation data had found.

An interactive, zoomable map produced by Climate Central so people can view their neighbourhoods also showed that large areas of the Netherlands, London, New York, Miami, Tokyo and other parts of the industrialised world are at risk. The study, which found that today’s dykes, sea walls and levees already allow 110 million people to live below the high tide line, did not factor in the impact of these or possible future defenses, the authors said, citing a lack of data.

Although a certain amount of sea-level rise is baked into the climate system due to a legacy of past carbon emissions, rapid cuts in greenhouse gas pollution now could steer the world away from worse coastal flooding by century’s end, the study found.

The authors urged governments to urgently conduct surveys to find out how feasible it might be to hold back the rising waters as well as take action to reverse carbon emissions, which hit a record high last year.

“We don’t know whether today’s coastal defences will be sufficient for tomorrow’s sea levels,” Strauss said. “Every day of warning we’ve had for a hurricane saves lives and property. Every decade counts in preparing for sea-level rise.”