Fashola says Discos delivering only 444MW of electricity to consumers 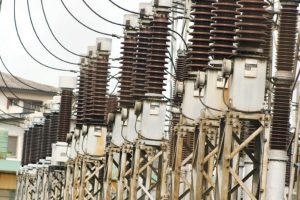 *Demands explanation on why they can’t supply 5,756MW

29 July 2018, Sweetcrude, Lagos — Minister of Power Works and Housing, Babatunde Fashola has demanded an explanation from the electricity distribution companies or Discos on why existing 408 functional power feeders is able to carry only 444 megawatts (MW) to consumers.

In a statement published by the Ministry of Power, Works and Housing, the minister said the feeders are supposed to deliver 5,756MW to consumers and not the current 444MW, adding that the lapses have been due to faulty lines, bad equipment, and load shedding by Discos.

Fashola, who was responding to the Association of Energy Distributors, ANED’s spokesperson, Mr. Sunday Oduntan’s confrontational statement in defense of the Discos, said the public needed an explanation on whether it was the responsibility of the Ministry to “fix these lines and whether the unused energy will not reach the consumers if the feeders are put to use”.

“These are part of the subject of my directives to NERC to address deliberate load shedding.

“Oduntan should advise his clients to spend the money used in publishing media responses to fix these problems, to restore bad lines and provide transformers and meters to their consumers.

“That is what electricity consumers want – better service,” Fashola said..

The minister had earlier asked Oduntan not to misinterpret an earlier message from him as “an attempt to demonise the Discos”, adding that if the Discos connect with their consumers, “they will hear from them first-hand, how traumatised they feel about load shedding, absence of meters and estimated billing”.

“The Gencos, who are short paid because the Discos under-remit in spite of high estimated billing to consumers, will tell Discos how they feel.

“My directives seek to rectify these problems because I believe they can be rectified.

“If Oduntan truly speaks for the Discos, which I doubt, he should ignore the messenger (Fashola) and advise those for whom he acts as surrogate, to focus on the message”, he added.

Giving details of the message, the minister said: “Electricity consumers (which include Fashola), want better service. NBET wants its money, about N800 billion, so she can pay Gencos; and if Discos can prove that FGN (Federal Government of Nigeria) owes more than what we admit, they should deduct (N72 billion) from N800 billion and pay the remaining N728 billion which they owe NBET”.

Fashola had in his speech at the power sector meeting in June, accused the Discos of trying to sabotage the market, and threatening other investors from coming into the market. He maintained that the government did not sign an exclusivity agreement with the power distribution companies and would not hesitate to show any of them the way out of the market if they fail to deliver quality services for which they knowingly signed for.

He also issued a couple of directives to the Nigerian Electricity Regulatory Commission, NERC.

And, in another response, Fashola said: “Any right-thinking and well-meaning person knows that power supply has economic consequences and has political relevance.

“However to suggest therefore that my directives were political, turns reality on its head; because for the past 20 months, in all my public briefings at monthly meetings with the Discos, these same issues of service delivery, of meters, estimated billings, investment in distribution equipment by Discos have dominated my remarks.

“However, assuming this was not so, does the onset of elections preclude the quest for better service or continued governance?”

He continued: “If Mr. Oduntan represents the Discos who, for reasons best known to them, choose not to act to save their investments, that is a matter of choice for them.

“His statement that no directives from me will save the power sector from collapse, is consistent with the views of someone who has no skin in the game.

“It is perhaps a Freudian revelation of the mindset of those he represents, whoever they may be. It is a sickening parallel of the Biblical story of the woman who tried to steal a baby before the great King Solomon asked them to divide the child. It is revealing of the mindset of a saboteur, not a builder, and he would do very well to acquaint himself and advise his co-travelers about the consequences of sabotaging the economy under our laws.

“While the Discos reserve the right to choose to affiliate with that view or disown it, I am optimistic that the power sector will prosper in spite of Oduntan-minded personalities.

“As for the allegation that figures of power generation and distribution released by me are not true, the taste of the pudding lies with those who eat it.

“These figures have been released many months back when we reached those milestones as part of my monthly report and roadmap of incremental power.

“It is clearly Oduntan-like to keep quiet at the time, when there were no directives, and to suddenly wake up many months later to dispute what he did not contest”.