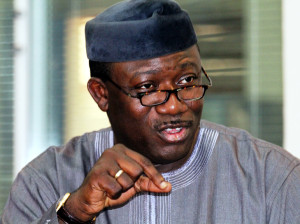 25 October 2017, Sweetcrude, Abuja – Minister of Mines and Steel Development, Dr. Kayode Fayemi, has disclosed that after securing a $150 million loan from the World Bank earlier this year for strategic interventions in the mining sector, the government plans to put in place another $600 million to further boost the sector.

Dr. Fayemi revealed this at the second Annual Nigeria Mining Week in Abuja, where he outlined some of the achievements of the Ministry of Mines and Steel Development under him.

“The Ministry through the Federal Government has secured a $150 million loan from the World Bank for the Mindiver Project aimed at funding strategic interventions in the sector. Plans are also underway to assemble a $600 million investment fund for the sector, working with entities such as the Nigerian Sovereign Investment Authority, the Nigerian Stock Exchange and others,” he said without giving further details about the $600 million fund.

According to him, the $150 million World bank loan and the $600 million fresh funding “are a far departures from the past”, when funds available to the ministry was meagre. He cited 2015 as a case, noting that only N1 billion was allocated to the ministry for that year, out of which only N352 million was released.

Fayemi listed other achievements of the ministry since the new reforms introduced by the President Muhammadu Buhari administration to include improved Perception of the Nigerian Mining Jurisdiction; improved Institutional Capacity/Improved Mines Security; improved Sectoral Access to Finance and the institutional capacities of the ministry and its agencies in regulating the sector.

According to him also, “the mining sector has begun to record very impressive results”. “We achieved a 300% increase in revenue (royalties and fees) between 2015 and 2016, and as at July of this year, the sector had already surpassed the entire revenue of N2 billion generated for the whole of 2016,” he said.

He added that, “The Nigeria Bureau of Statistics recently reported GDP figures for the second quarter of 2017, indicating that the economy grew by 0.55%, attributing the economic recovery to the performance of not only the Oil and Gas sector but other main economic activities such as – mining, agriculture, manufacturing and trade, albeit marginally.

“The overall economic plan and direction of the administration has resulted, among others, in sustained restoration of oil production levels, (occasioned by the enhanced security and stability in the Niger Delta) sustained growth in agriculture, mining and the first growth recorded in industry as a whole in the last nine quarters since Q4 2014. The Mining sector which remains a priority of this administration also continued to grow by 2.24%.”