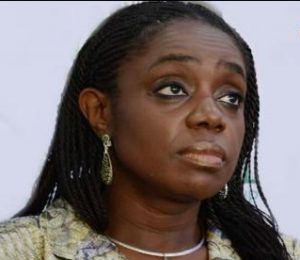 21 August 2018, Sweetcrude, Lagos — The Minister of Finance, Mrs Kemi Adeosun, says the Federal Government has made fiscal changes to enhance the competitive position of the Nigerian Liquefied Natural Gas, NLNG.

Adeosun, who spoke during a visit to the NLNG plant in Finima, Bonny Local Government Area of Rivers State, said the government did this by removing the disparity in VAT in tax treatment between imported and local Liquefied Petroleum Gas, LPG.

Announcing the development, the minister said: ” That (fiscal changes) will give an additional market share to NLNG-produced LPG, and, of course, it is a major objective that the management has campaigned for and the Federal Executive Council has approved it”.

“So, we expect greater market share to the NLNG;  of course, that has knock-on effects, it stops people from using firewood to cook, it stops deforestation.

“It has a lot of environmental benefits as well as more revenue to the NLNG,” she added.
Adeosun said she was in Bonny to inspect the NLNG facility that had been generating huge revenue in taxes and dividends to the government and described the facility as  impressive and a modern hi-tech plant.

She said: “We saw the old Trains 1 to 6, and the space for the incoming Train-7 which has the potential of creating 10,000 jobs in the next nine months.

“The jobs to be created will be sustainable for the next five to six years  and this is extremely exciting because the multiplier effects will be huge.”

She also described the trip to the plant as very revealing, adding that more people would build houses and land value would go up.

Mr. Tony Attah, the Managing Director and Chief Executive Officer of NLNG, commended the minister for visiting the plant. Attah said that the NLNG model was working effectively as the organisation had been positioned as a global brand.