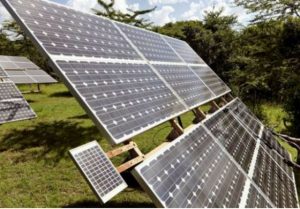 20 January 2018, Sweetcrude, Abuja – The Federal Government, in partnership with the European Union and Germany, has announced the construction of solar-powered mini-grids in five states of the federation under the Nigerian Energy Support Programme (NESP).

A statement from the Programme announcing the latest rural electrification programme undertaken by the EU and Germany in Sokoto State, and sent to our correspondent in Abuja, indicated that six solar mini-grids are currently being supported by the programme to provide electricity to residents of Ogun, Niger, Plateau, Sokoto and Cross River states.

The agency stated that as part of the rural electrification programme, an 80kWp solar mini-grid project had successfully been completed in Kurdula, Gudu Local Government Area of Sokoto State and would be inaugurated on Friday.

It noted that through the project funded by the European Union and the German government via the Federal Ministry for Economic Cooperation and Development, more than 4,000 people would benefit from clean electricity in Sokoto State.

It said, “The Kurdula solar mini grid is one of six such projects currently supported by the Nigerian Energy Support Programme. Altogether, the projects will provide electricity to more than 10,000 people across five states of Ogun, Niger, Plateau, Sokoto and Cross River.

“It has been implemented by GIZ together with the Federal Ministry of Power, Works and Housing, the Sokoto State Government and a private company, GoSolar.”

It stated that through the NESP, the European Union and the German government were supporting the FMPWH and other relevant stakeholders in Nigeria’s power sector to ensure that energy solutions such as the mini-grid approach could be replicated and scaled up.

The agency said, “An additional 100,000 rural inhabitants in several states across Nigeria will receive support from the programme until 2020. The NESP is a €24.5m technical assistance programme launched to promote investments in renewable energy, energy efficiency and rural electrification.