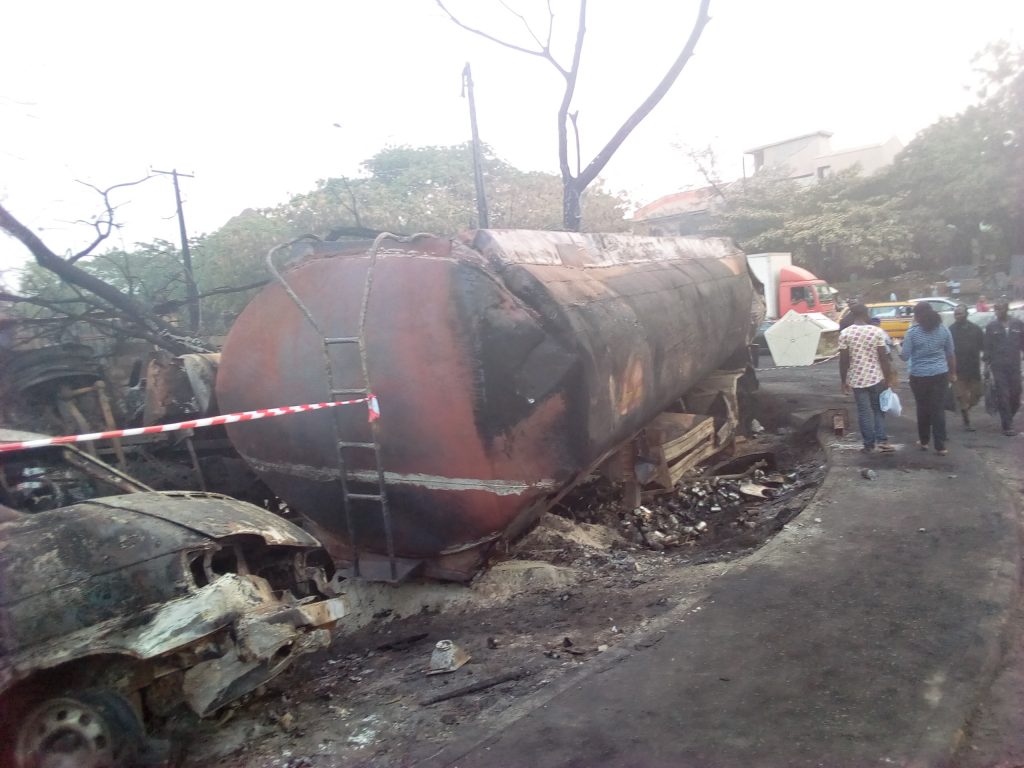 *The burnt remains of the fuel tanker and one of the vehicles affected by the fire on the Festac-Amuwo Odofin link bridge.

15 December 2017, Sweetcrude, Lagos — Traders affected by the explosion of a tanker carrying 33 litres of diesel on Tuesday at Festac Town, Lagos, have lamented the loss of goods worth over N50 million naira in the fire.

The tanker had tumbled and exploded around 11 am on Wednesday after failed attempts by the driver to climb the Festac – Amuwo Odofin link bridge on its way to offload the product at MRS petrol station not too far from the point where the accident had occurred.

When SweetcrudeReports visited the accident scene, the part of the bridge where the tanker fell from was already barred with police white and red tapes, preventing both vehicles and pedestrians from walking on the burnt section of the bridge. 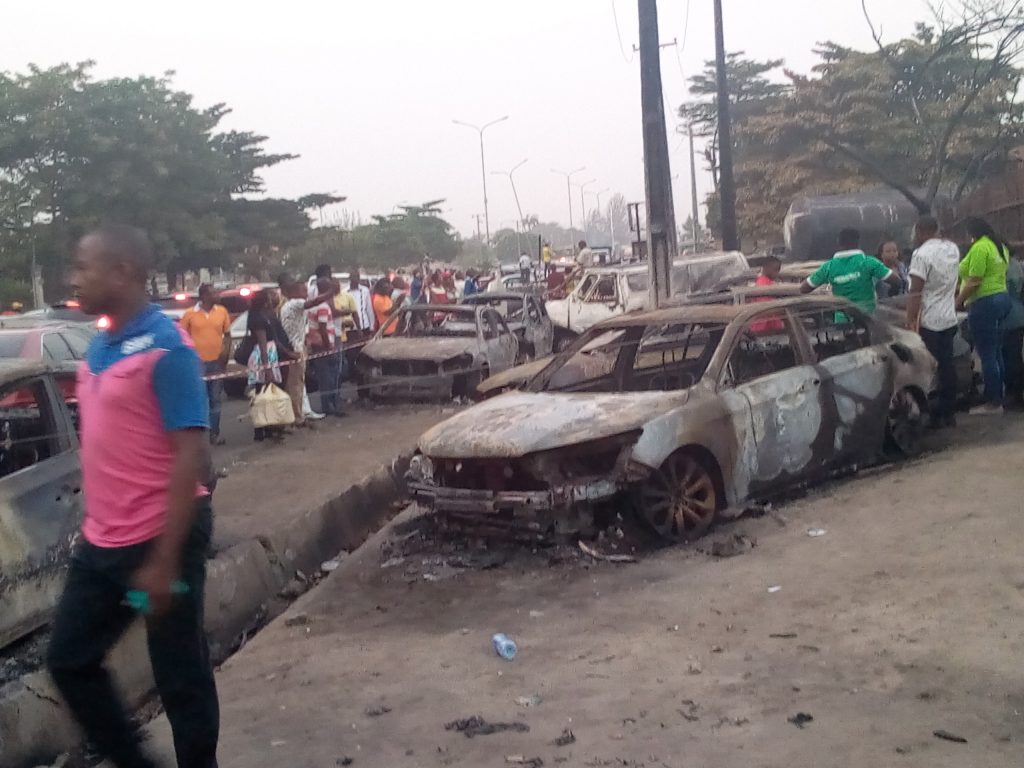 *The charred remains of other vehicles affected by the fire with onlookers still trying to come to terms with the development.

Traces of diesel that sipped out from the tanker could also be seen floating on the canal just under the bridge, with marine police patrolling the waterway keeping a keep eye on the situation.

According to information gathered from eyewitnesses, while trying to ascend the bridge, the tanker vehicle brakes failed, resulting in the tanker drifting backward, and hitting a commercial bus right behind him.

“The bus driver was also trying to reverse in a bid to avoid the tanker but got stuck because there were other buses behind him,” one of the witnesses simply identified as Suleiman revealed.

As a result of being stuck, the diesel tanker filled with 33 litres of diesel, was said to have tumbled from the bridge to the ground, not too far from where a bag dealer, upholstery shops, artists, and major car dealer displayed their goods.

Within five minutes after the tanker fell, witnesses said policemen from the Festac station were quickly deployed to the scene to control traffic, however, as the commercial driver who was right behind the tanker cranked his engine to leave the scene, the ignition triggered the diesel, resulting in an immediate explosion.

As at Thursday evening, the fire had destroyed 21 cars including the bus directly behind the tanker. SweetcrudeReports could see ashes from the burnt vehicles, furniture, art designs, and bags.

Although no life was lost, few people were reportedly injured. 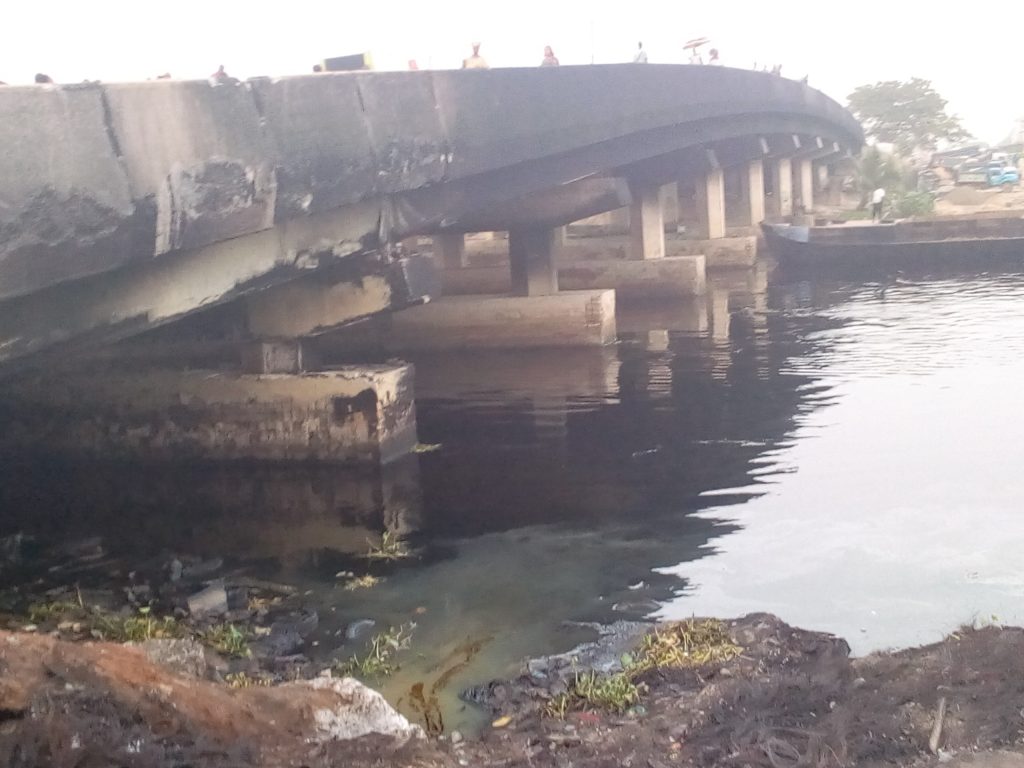 *Section of the Festac link bridge impacted by the fire incident.

“Some even had to jump into the water to save themselves from the fire. Those that jumped into the canal also sustained injuries”, Suleiman added.

From Tuesday until Wednesday, there was a heavy buildup of traffic resulting from the closure of one section of the bridge.

Residents of Fesctac Town and its environs have also been impacted by the fire incident, as commercial vehicles refuse to ply the affected route, resulting in commuters resorting to trekking.

However, as at Friday when SweetcrudeReports revisited the site, the police tape had been removed, enabling free movement of vehicles and pedestrians.

Speaking on the incident, Sergeant Okey Emmanuel and Sergeant Friday Abdul from Festac station who were on patrol of the area told SweetcrudeReports that those injured had been taken to the hospital for treatment.

According to them, sensing the danger of what had happened, the tanker driver had fled the scene, taking with him the plate number of his tanker which would have been used to trace its owner.

“He ran away and took the plate number with him. As you can see, we have barricaded the scene to allow for more investigation”.

Some structural engineers who were on ground to assess the part of the bridge affected by the fire also volunteered to react to SweetcrudeReports inquiry noting that the impact of the fire incident on the bridge was not enough to stop vehicles and pedestrians from using it.

Eyewitnesses had revealed that the instruction to close one section of the bridge was given by Dipo Olorunrinu representing the Amuwo Odofin constituency during his visit to ascertain the impact of the fire incident.

“It will take ten years before the bridge can collapse even after being burnt like this. Besides, the bridge was not made with just ordinary concrete. It’s very strong”, the engineers who pleaded anonymity disclosed.

SweetcrudeReports noticed some cracks just underneath the bridge, however, could not ascertain whether it was as a result of the fire which had also turned the bottom of the bridge into the black.

Also speaking, the car dealer, Chief Chinedu Nwogwo described the incident and the financial loss he has incurred as “unfortunate”.

“Yesterday afternoon around 11:20 am, we were sitting there in the office and heard people shouting ‘it’s rolling back! It’s rolling back!’ by the time we came out, we saw the trailer rolling back. Within the twinkle of an eye, say in 30 seconds, it crashed landed and the diesel busted. The whole vehicles I lined in front, 10, burnt to ashes. The one inside at the front row, also burnt. The 4Runner 2005 burnt completely. This CRV including the engine burnt completely. Total cars burnt in my garage is 21,” he said.

“You will also add five vehicles following the truck. Everything is 26”, he added.

When SweetcrudeReports asked whether the cars were insured, he said “no”.

“How can I insure second-hand cars?”

He lamented lack of provision for any emergency in the country.

“Most of these vehicles wouldn’t have burnt because the fire service came early enough to salvage the situation. But their equipment did not work. The truck was not functional and the whole thing burnt completely right before them. The people that even came were inexperienced. How can they afford to make such mistake in this 21st century,” he said.

Experts on the ground said the owner of the diesel tanker could be traced if the police had been able to lay hand on the plate number of the truck.

The owner of the bags said he lost between 60-70 sets of bags.

“I deal in traveling boxes. They are usually inset and are designers. We have the one of one set selling for thirty-five thousand Naira. The sad thing is that we offloaded our festive period order last week and are yet to sell much. Some people who have even ordered and paid for some of the bags could not get their orders. They have been calling me since yesterday.”

“If I calculate everything, they are worth over N5million and I could not save even one. Before we could get ourselves together, everywhere was already filled with thick black smoke from the fire and we couldn’t see the ground. We had to run for our lives. The fire was too much” Charles Onuah said.

“Chairman of the local government came and asked me to write but we are yet to hear from him. During the tenure of former chairman, Ayo, he put an iron over the bridge so that no truck would have access to the bridge. Trucks were supposed to go through Durbar road. But because of corruption of those surrounding him, he was forced to remove the iron. Now we don’t have anything. We lost everything after withdrawing all the money in our account. Now we don’t know where to start, ” he added.

Ejima Nwokoma, who spoke on behalf of the upholstery, artists, and electricians who were affected by the incident, said he had cried until there were no more tears left in his eyes.

“Yesterday, I was not around. I went to work and was called that everything had burnt. I could not save anything from the shop. All my materials and furniture belonging to customers were destroyed in the fire. We calculated everything and it was almost N7 million. We have cried since yesterday. We don’t know how to tell our customers and family what happened. We don’t know what to do,” he said.

“Some of my workers even jumped into the canal and were injured. We want the government to help us because as we are now, we are stranded,” he added.