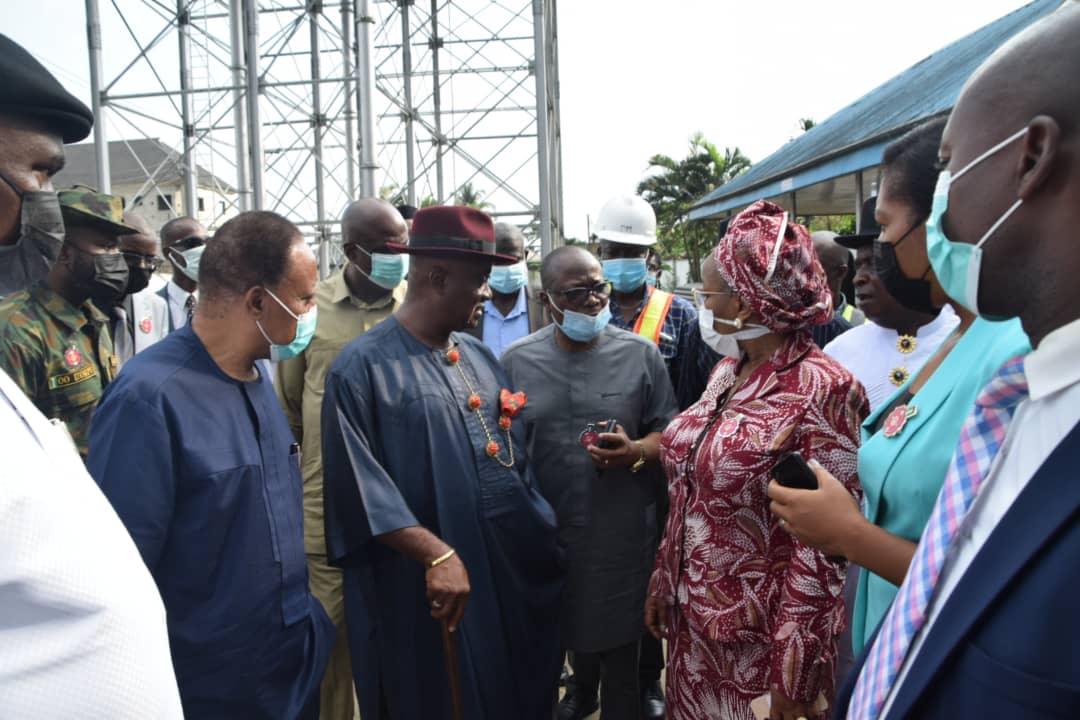 *Minister of State for Environment, Sharon Ikeazor, flanked by HYPREP Coordinator, Prof Philips Shekwolo and other stakeholders, inspecting a remediation site in Alode, Eleme on Monday

Port Harcourt — The Federal Government has announced that it will engage the youths of Ogoniland for environmental surveillance in the ongoing clean-up of oil polluted sites in Ogoni being carried out by the Hydrocarbon Pollution Remediation Project.

The Minister of State for Environment, Sharon Ikeazor, made the announcement on Monday at a one-day stakeholder engagement programme on the clean-up of Ogoniland, held in Bori, Khana Local Government Area of Rivers State.

Ikeazor also announced that there will be a health audit of Ogoni people, to ascertain the effect of prolong exposure to hydrocarbon on the health of the people, to determine the kind of interventions that needed to be done.

She gave the assurance that the Ministry of Environment will continue to engage with the people of Ogoni on the project, while also appealing for the collaboration with all stakeholders to make the cleanup project a success.

“For advertisement of contracts, I have made sure that due process will be followed. The bids will be open to all qualified Nigerians.

She spelt her vision for the project and the Ogoni people, saying, “My goal is to ensure that the clean-up project is owned by the Ogoni people and the more indigenous people acquire the required skills and ability to participate in this cleanup, the better for us.

“I have directed the Project Coordinator of HYPREP to go ahead with the advertisement for the setting up of the Integrated Contaminated Soil Management Centre, as well as the Centre of Excellence and I hope it will come up next one year.”

Earlier, the Chairman of Ogoni Supreme Council of Traditional Rulers, HRM King Godwin Gininwa, called on the Federal Government to expediate action on the establishment of a University of Environment in Ogoniland, which the Bill was recently passed by the Senate.

King Gininwa also called for speed on the pace of the ongoing clean-up exercise, as well as award of contracts and jobs to the people of Ogoniland, to enable them benefit from the project, having suffered for so long from pollution.

“We will cooperate with you to make the project a success. However, our people have suffered enough, therefore they should be made to benefit from the project in terms of jobs, contracts. Ogoni people should be considered first when awarding contracts.

On his part, former President of the Movement for the Survival the Ogoni People, Barr. Ledum Mitee, called for the employment of youths in the project as well as training of Ogoni youths in requisite skills.

“Money spent on security should be channeled into youth employment. Ogoni youths should be employed to secure HYPREP project sites, and by so doing improving the local economy and lives of the people.”

Project Coordinator of HYPREP, Prof. Philip Shekwolo in his opening remarks had briefed the stakeholders on the achievements of the project in the areas of remediation, provision of potable water, livelihood trainings among others.