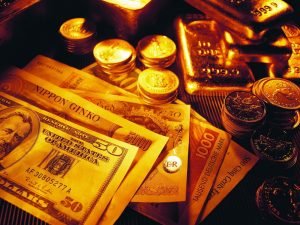 06 March 2018, Sweetcrude, Lagos — The local and international financial market products and services update.
NIGERIA: Nigeria’s trade account turned positive in 2017 as a rise in oil exports outweighed imports after dollar shortages frustrated transactions, the National Bureau of Statistics (NBS) said. The balance of trade last year was 4.03 trillion naira ($13.2 billion). The net trade balance stood at minus 290 billion naira for 2016. The rise boosts Nigeria’s ambition to promote exports to support its fragile economy and earn foreign exchange while reducing imports. Its 2017 gross domestic product rose 0.8% to emerge from Nigeria’s first recession in 25 years. Nigeria, which faced a currency crisis in 2016 as oil revenues fell, has been trying to diversify its economy away from oil, boost local production and generate non-oil exports. But it needs to build infrastructure such as roads and rails to help boost non-oil exports.

FIXED INCOME: A bit of buying in bonds yesterday among local and offshore clients before some reversal towards close. Interest was skewed to the long end (>15yr) of the bond curve.

In bills, there was buying across the curve supported by liquidity in the money market. The CBN resumed its OMO issuance and sold a total of N89bn of the 18th Oct 2018 bill at 14.4% discount.

CHINA: Premier Li Keqiang said at a closed-door meeting on Sunday that one-way moves in China’s currency should be avoided, according to people familiar with the matter.

China should have a good handle on the Yuan’s exchange rate and avoid big swings, Li said during a gathering of economic and agricultural delegates at the annual legislative sessions, said the people, who asked not to be identified because the panel discussion was private. Li added that one-way movement of the currency is bad for everyone, the people said.

GHANA: The International Monetary Fund is confident Ghana will implement outstanding measures needed for a successful review of its $918 million aid programme next month, the Fund’s Ghana chief said on Monday.

The major commodities exporter is in the final year of the programme, signed in April 2015 to restore stability to an economy dogged by deficits, public debt and low growth with inflation consistently above target.

A confidential document seen by Reuters on Friday said the IMF wants Ghana to adopt new measures to boost revenues, slow the pace of borrowing and outline plans to clean up the financial sector.

COMMODITIES: Optimism in the oil market that lifted prices by the most in almost three weeks eased as investors assess the outlook for global consumption against fears that U.S. shale output will swamp demand.

After jumping 2.2% on Monday, prices posted a more muted 0.2% increase on Tuesday. On one hand, estimates for growing crude demand and analysts forecasts for shrinking stockpiles at Cushing in Oklahoma, a key American storage hub, helped support futures. But the International Energy Agency’s warning the OPEC cuts that boosted prices will unleash a supply surge from the U.S. and other producers sparked caution in the market.