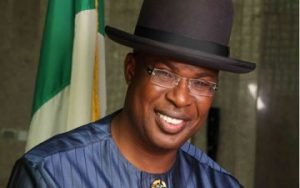 Port Harcourt — A group known as Ogoni Youths Federation, OYF, has urged the Minister of State for Petroleum Resources, Chief Timipre Sylva, to find solutions to the issues surrounding OML11, in order to pave the way for resumption of crude oil exploration in Ogoniland.

President General of the gorup, Legborsi Yamaabana, said resumption of oil and gas activities in Ogoniland would avail the youth and other critical stakeholders of Ogoni, employment opportunities and other benefits in their God-given resources.

Yamaabana added that Sylva’s ability to resolve the 26years old debacle, would position him on the global map as an astute administrator.

“Whilst we commend the Honourable Minister for resolving the two year protracted disputes between SPDC and host communities of OML25 amicably, we urge him to use his good office to address the decades of stalemate in OML11 between the Ogoni people and the Federal Government.

“Over the social, economic and environmental injustice, which till date have generated a lot of international concerns, leading to the shut-in of oil and gas operations in Ogoniland for upwards of 26 years since SPDC was declared persona non grata in 1993.

“The resolution of this debacle (OML 11 Ogoni Fields issues) is crucial, as it would pave way for a smooth re-entry into Ogoniland for the purpose of resumption of oil and gas production, and avail the youth and other critical stakeholders of Ogoni, the opportunity to benefit from their God-given treasures and resources.

“We urge the Minister to resolve this protracted fiasco which has defied solution for more than 26 years, as it will position him on the global map as an astute administrator and score his administration as the Minister of State for Petroleum Resources very high.”

The group also applauded the Minister of State for Petroleum Resources, Chief Timipre Sylva, for showing commitment to reform the petroleum industry by demanding for the passage of the Petroleum Industry Bill, PIB, into law in mid 2020.

Yamaabana said the move is commendable and a show of complete good faith as the future of the petroleum industry and, indeed, the country depends on the PIB.

“We believe in the PIB bill because it will help in solving the developmental issues in the Niger Delta and ensure lasting peace. The passage of the bill would also help to sanitize the petroleum industry and enhance the development of the oil bearing communities.

“In the short time that Chief Timipre Sylva came on board as Minister of State for Petroleum Resources, he has not only performed creditable, but he has also raised the bar of performance to a level that is difficult to beat.”