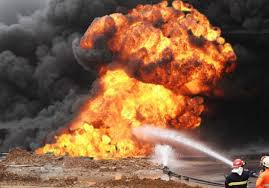 It was gathered that some suspected pipeline vandals, had besieged the pipeline around 6pm and were said to be scooping petroleum product into jerry cans.

It was gathered that an argument ensued among the vandals as they were scooping the PMS, while one of them ignited the fire that caused a massive explosion that set the entire area on fire.

Residents of Ijedodo and Abulado areas who witnessed the massive inferno called on the authorities to expedite actions and put out the fire.

Meanwhile, Vanguard could not confirm the number of casualties as the fire was still raging at the time of fling this report but South West spokesman for National Emergency Management Agency, NEMA, Ibrahim Farinloye, in a text massage confirmed the explosion.

Farinloye, who did not disclose the number of casualties said: “There was pipeline explosion at Ijeododo this evening (Thursday). Vandals were suspected to have broken the pipeline, scooping the product and in the process the pipeline exploded.”
*Evelyn Usman, Bose Adelaja & Ifeanyi Okolie – Vanguard