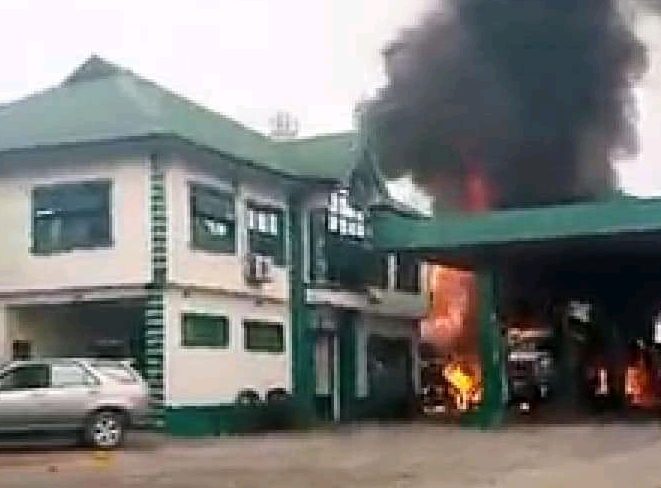 Port Harcourt — Fire on Tuesday, gutted a filling station in St. Johns, around Rumuolumeni area of Port Harcourt, after a tanker discharging petroleum product went up in flames.

SweetCrudeReports gathered that it took the intervention of youths and other residents of Rumuolumeni to quell the fire and avert what would have resulted to total disaster.

A youth leader in Rumuolumeni community, Chukwudi Chindah, said the entire station would have been razed completely and even put the lives and properties of residents living around at risk, if not for the youths.

Chindah said the state fire service was alerted via numerous phone calls immediately the incident occurred, but the fire service team arrived when the youths had already succeeded in putting out the inferno.

The fire service team were later chased away by angry youths for arriving hours after they had put-off the fire.

Meanwhile, the Rivers State Government has sad it has constituted a team to minimize incidents of explosion in oil and gas industries across the Local Government Areas of the state.

Commissioner of Energy and Natural Resources, Dr. Peter Medee, who said this at the scene of the burnt filing station in Iwofe-Rumuolumeni Road, said government has continued in sensitizing on dangers associated with gas explosion.

Medee commended the youths who assisted the government in putting off the fire, expressing the commitment of the government to ensure safety of lives and properties of Rivers people.

While reacting to increase in fire outbreak across the state, he condemned the activities of illegal refiners, saying that government was making efforts to create an alternative from artisanal to modular refinery.