on: September 16, 2018In: Community Development, featured 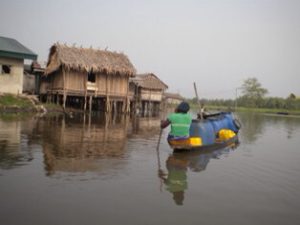 *A woman transporting water from the Chevron platform to her home in the Polobubo community.

16 September 2018, Sweetcrude, Warri, Delta State — Oil rich Polobubo community in Egbema kingdom, Warri North Local Government has again appealed to Chevron to close the channel it opened to the Atlantic ocean in the area, saying it is partly responsible for the flood suffered in the community.

Communities leaders, Dickson Asoki and Pa James Gbalubi who spoke on the flood that has rendered residents homeless in the community said they had written several letters to the oil giant to come to close the water channel that it constructed.

Already thousands of residents of the community have been rendered homeless as a result of the flood that sacked the area.

“We forwarded letters to the Presidency, right from the time of President Goodluck Jonathan, requesting that a new Polobubo should be reclaimed for us because this place can no longer support our living.

We need a new Polobubo and this place should be properly dredged. We are also aware that the approval has been given and we want that project to come up immediately so that situations like this can be mitigated.

We want to move to higher grounds and without that reclamation that can’t be done.

We can’t even quantify our losses to flooding over the years; we have lost access to our means of livelihood long ago.

This used to be a place where fishing and hunting activities happen, we can no longer practice our natural occupations again since the intrusion of this salt water into our environment, plant species are no more in existence, fishes are not here anymore.

All those freshwater fishes have all gone extinct. How do you quantify that? This issue has also taken away our drinking water, to drink water, we have to import from either Warri of other communities free of our kind of predicament. We used to drink water from our river because this used to be a freshwater habitat, but now we can’t even get water to drink from our own soil.

It’s either they send pure water to us from far away, or our people paddle distances to Chevron or Shell locations to fetch water from their taps.”

We have written to Chevron severally to close the channel they opened to the Atlantic Ocean because that is the sources of the salt water and the silt deposit.

If they close the channel the level of siltation will not be as rapid as it is right now. Dredging will mitigate it for a while, but over a period of about 5 years it will be silted again so, after the dredging, the channel to the Atlantic Ocean has to be closed permanently so that silt deposit won’t have access into our community again.”