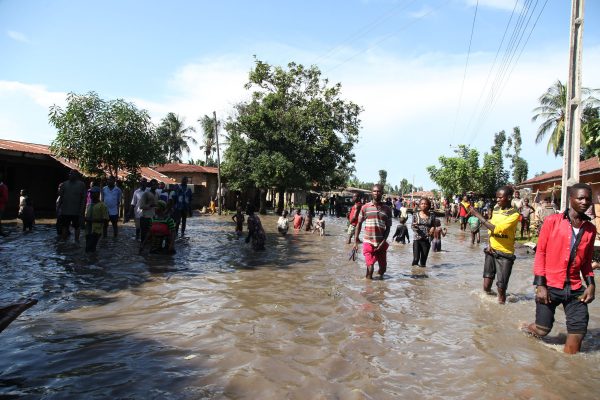 *Residents of Aggah, an agrarian community in Egbema within the Ogba/Egbema/Ndoni local government area of Rivers State.

03 April 2018, Sweetcrude, Port Harcourt — The people of Aggah community in Ogba/Egbema/Ndoni Local Government Area of Rivers State, have petitioned the Government of Italy and Eni the parent company of the Nigerian Agip Oil Company, a NAOC, following recurrent flood in the community, allegedly caused by the company.

Recall that last year, the community had threatened to petitioned the Italian Government as it called on the Environmental Rights Action, ERA, to prevail on NAOC over the recurrent flood in the area usually orchestrated by operations of the Italian oil company.

The community alleged that Agip built its oil-producing platforms on water right-of-way, a channel through which water from the community empties into Oloshi River in the area.

These were made known when a legal team, Advocate for Community Alternative, led by Barr. Chima Williams and Barr. Jonathan Kaufman, visited the community to intimate them of developments on the matter.

Speaking, Barr Chima Williams, the Principal Partner Chima Williams Associates, called on members of the community to remain peaceful and to speak in one voice in order to achieve justice.

According to him, “The community is only asking NAOC and Eni to sit and listen to the problem of the community caused by them through their activities. They should find an amicable resolution to the problems so that at the end both parties will benefit.

“The community should not see anybody as their enemy because they have already taken the right step in the pursuit of this justice. NAOC should accept the olive branch the community is extending to them for peace.”

Kaufman stated that justice would be achieved in the matter because it was not a complicated one.

“Approaching Italy where the parent company is, which the community has done is a right step. We will make the corporate headquarters to see reasons to resolve the problem of Aggah community.

“The Italy we have gone is one of the strategies adopted to ensure peace and justice. The community would prefer to see their problems solved through organised dialogue.”

For his part, the Coordinator of Egbema Voice of Freedom, EVF, Pastor Everistus Nicholas, said the community is in panic as the rainy season approaches, following the annual flooding orchestrated by oil facilities belonging to NAOC.

Nicholas explained that the community for over 40 years has been faced with annual flooding and called on the National Emergency Management Agency, NEMA, to get relief materials ready to help the community.

“We are happy that we have gotten the attention of the international community, we believe we are making progress. We know that Agip is always in the business of divide and rule but we will remain united.

“We have the mandate of the community that is why we rise to the occasion and over 1000 indigenes of Aggah turned out to sign a formal document submitted to the government of Italy.”

Meanwhile, a woman leader in the community, Mrs. Victoria Elechi, explained that the flood water is usually polluted and has been disastrous to the people.

“When the flood comes it causes a lot of problem in the community, when it goes it leaves many sicknesses. After the last flood the sickness that came killed about four pregnant women. The flood is polluted so it leaves everybody with sickness.