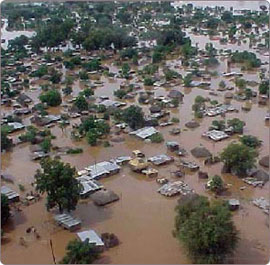 24 October 2012, Sweetcrude, Lokoja – Staff of the Nigerian Maritime Administration and Safety Agency in Lokoja, the Kogi State capital have been displaced by the flooding which ravaged most parts of the state.

A visit to the premises of the NIMASA office in Lokoja situated by the river showed that the flood almost covered most of the buildings and damaging sensitive surveillance equipment running into several millions of naira.

Head of the Lokoja office, Usman Balewa, disclosing this when a delegation from the agency’s headquarter led by Mrs. Juliana Gunwa visited to deliver relief materials.

She said that most of the office equipment, furnitures and electronics were destroyed, apart from a handful which the staff were able to move out of the office.

Balewa also said that most of their houses were affected, forcing them to start leaving in hotels while those who could not afford the cost have resorted to living with relatives outside Lokoja.

He explained that though the flood has since receded, it has been impossible to do any work owing to the damage occasioned by the flood, adding that workers are now forced to hang around outside the office when they report for work.

Responding, Gunwa whose team went to Kogi state to deliver relief materials to affected flood victims assured her Lokoja colleagues that NIMASA management would definitely respond soon, noting that she would report the level of devastation to the management immediately she returns to Lagos.

Gunwa earlier visited who had earlier visited the wife of the governor of Kogi state, Hajiya Halima Wada, explained that the agency’s gesture is part of its Social Corporate Responsibility (SCR) and that it is not limited to Kogi state alone.

The NIMASA Director said that top officials of the agency are leading different delegations to the affected state to help cushion the suffering of the people in the affected communities.

She said that she and her team have gone round parts of the state and have seen first hand the level of the “devastation” of the flood, noting that even the agency’s office in Lokoja is not spared by the flood.

She noted that NIMASA staff in the state are not only sacked from their office but their houses as well.