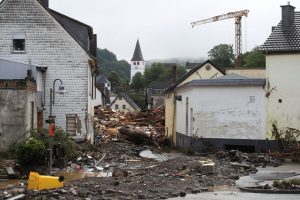 “We are trying to resolve the situation with all available hands on deck,” she said in response to an inquiry.

The company’s grid area spans large parts of the states of North Rhine-Westphalia and Rhineland-Palatinate, but not the cities of Cologne, Wuppertal and Duesseldorf. It supplies around 7.5 million with power, gas, water and heat.

She said many power substations could not be reached for repairs because roads were still blocked. Some unreachable installations were being monitored with drones.

Westnetz was working with authorities and crisis response teams across the region, she said.

Some rail and road transport has been disrupted across the region, and shipping on parts of the Rhine, an important trade artery, was suspended on Thursday while more heavy rain was due in southwestern Germany.