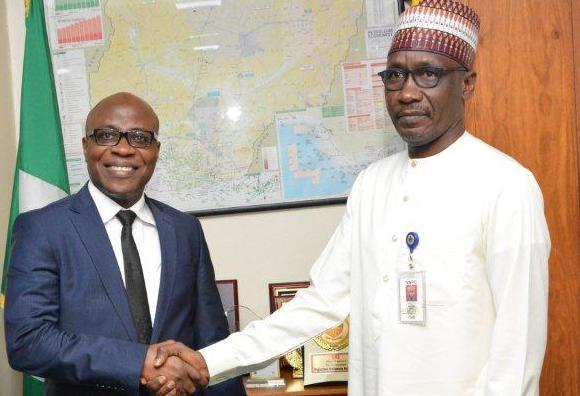 *Waziri Adio with Mele Kyari at the NNPC Towers, Abuja

Abuja — The Group Managing Director of the Nigerian National Petroleum Corporation, NNPC, Mallam Mele Kyari, has urged the public to be wary of attempts to drag the corporation into politics in the guise of requests for information under the Freedom of Information law.

Kyari made the call during a courtesy visit by the Executive Secretary of the Nigeria Extractive Industries Transparency Initiative, NEITI, Mr. Waziri Adio, to the NNPC in Abuja.

Kyari stated that though the corporation was committed to transparency and accountability to the Nigerian people, a line must be drawn between genuine requests for information and malicious attempts to drag it into politics using the FOI law as a cover.

“As you are aware, sometimes the requests are brazenly malicious, and they are laden with political undertones. NNPC finds it difficult to respond to such requests because it is mindful of falling into the trap of being drawn into politics or maligning others,” he explained.

He disclosed that in keeping with its commitment to be accountable and transparent, the corporation would publish its audited accounts soon.

On the disclosure of contracts and contractors as requested by the NEITI boss, he said the biggest contracts in the corporation’s portfolio currently are the products supply contracts under the Direct Sales Direct Purchase, DSDP, scheme, adding that details of the contracts and the contractors would also be made public within this month.

He promised to make the monthly financial and operations reports more accessible by publishing the soft copies of the reports from January to May 2019.

On his part, the Executive Secretary of NEITI, Mr. Waziri Adio, congratulated Kyari on his appointment, saying: “This is a big opportunity you have been given to shape the direction of this country in a positive way and I believe you have the capacity to do that”.

He said he was particularly impressed with the corporation’s robust deployment of modern information and communication platforms, especially the website, which he noted could be used as a transparency tool through pro-active disclosures.

He said he was committed to working with the NNPC because of the GMD’s track record of integrity.

“The GMD is somebody we can vouch for, he is a transparency champion and I can’t remember any GMD’s appointment that has elicited as much goodwill as your appointment has generated”, he said.