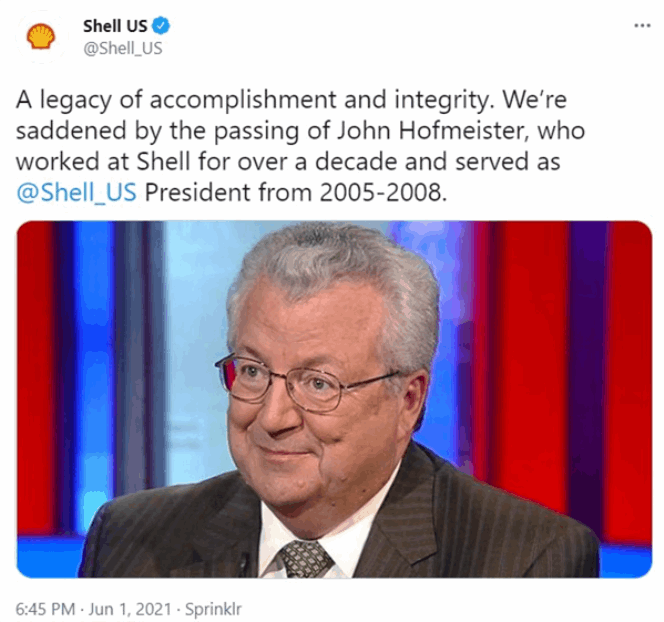 News Wire — John Hofmeister, who worked at Shell (NYSE: RDS.A) for more than a decade and served as president of Shell Oil Co. in Houston from 2005 to 2008, has passed away, Shell US tweeted Tuesday evening.

According to a written statement Monday from ioneer Ltd. (ASX: INR), a metals and mining firm for which Hofmeister served as a non-executive director, the former Shell executive died after a brief illness.

“John brought energy, intellect, and deep experience to our company,” remarked James D. Calaway, executive chairman of ioneer, which is developing a lithium-boron project in Nevada. “His years at GE (NYSE: GE), AlliedSignal and Royal Dutch Shell … allowed him to have a profound impact on ioneer’s development and culture. Much of John’s professional expertise was gained through serving the organizations he worked for at the most senior human resources levels … He had an uncanny way of understanding leaders and people.”

Calaway also recognized Hofmeister’s contribution to the global energy policy debate. He noted the former Shell exec sat on the United States Energy Security Council, founded the not-for-profit Citizens for Affordable Energy, and chaired the U.S. Department of Energy’s Hydrogen Fuel Cell Technical Advisory Committee. He added that Hofmeister was a scholar/executive-in-residence at Arizona State University, a lecturer at the University of Houston and Kansas State University, and a board member for the National Urban League.

“At a practical, industry level, John understood the challenges that must be addressed to make the necessary energy transformation we need for a sustainable future,” said Calaway. “We are forever grateful to this great man’s passion, energy, and intelligence that he willingly shared with our company. All the members of the board and executive team send their prayers to John’s loving family as they have assuredly lost the love of their lives.”