Port Harcourt — In order for the people of Ogoni to have access to a healthy environment, the Federal Government has been charged to expedite action on the cleanup of oil impacted sites in Ogoniland.

Particularly, the Federal Government has been charged to speed up the process for the provision of potable water for the people of Ogoniland.

The Cable Newspaper Journalism Foundation who gave the charge, regretted that months after the federal government flagged off the N6.7billion water project in Ogoniland, nothing has been done till date.

Senior Programme Officer of the Foundation, Mrs. Abiose Adams, said this in Mogho, Gokana LGA of Rivers State, during an event tagged, Amplifying Ogoni Voices, organized by the Foundation with funding from Bertha Foundation of UK.

Adams who presented a drama titled, Environmental Refugees, explained that the event was organized to stir up government response to the clean up of oil polluted Ogoniland. 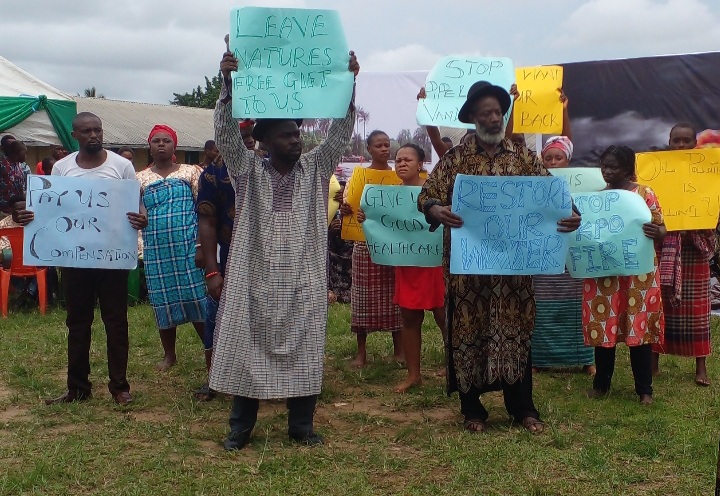 “The government should expedite the process of the Ogoni cleanup, so as to deliver environmental justice to the Ogoni people.

“The people of Ogoniland having their environment polluted for so long is an injustice to them.

“The slow response is what I have been writing about. So i want the government speed up the process.”

Also, Executive Director of Youths and Environmental Advocacy Centre, Fyneface Dumnamene Fyneface, said the event was a summary of environmental issues in Ogoniland and demanded for environmental justice for the people.

“The clean up is not done according to the recommendation of the United Nations Environmental Programme. UNEP recommended that the cleanup should begin with the provision of water.

“The flagged off of the water project and the acclaimed cleanup is just a media show, because Ogoni people are still without water and the environment is still polluted.”

For his part, the Lawmaker representing Gokana Constituency in the Rivers State House of Assembly, Barr. Dumle Maol, called for a legislative framework to back the setting up of Hydrocarbon Pollution Remediation Project, HYPREP.

Maol explained that without a legislative backing, subsequent government would easily scrap off HYPREP thereby putting the cleanup on halt.