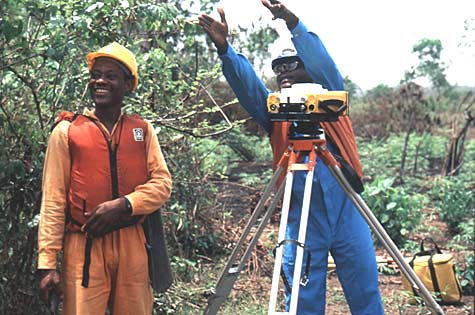 *Survey activity in the Chad Basin.

Princewill Demian
03 March 2018, Sweetcrude, Abuja – Freed lecturers of the University of Maiduguri (UNIMAID), who were in Boko Haram captivity for about eight months, have expressed their willingness to resume oil exploration in the Lake Chad Basin.

The exploration exercise, which was under the auspices of the Nigerian National Petroleum Corporation (NNPC), was interrupted after an attack by Boko Haram insurgents, who killed one of the lecturers.

Now free, the surviving lecturers said they are ready to go back to the Chad Basin.

UNIMAID Vice Chancellor, Professor Ibrahim Njodi, who met the Group General Manager of the NNPC, Dr. Maikanti Baru, alongside the lecturers, in Abuja, said the freed lecturers and the entire university community were ready to remobilise for oil exploration in the Chad Basin.

Professor Njodi said despite the harrowing experience of the adoptees in the captivity of the insurgents, the University of Maiduguri was focused on carrying through the exploration programme in the inland sedimentary basins.

The Vice-Chancellor said he regretted to announce the demise of one of the victims of the attack, Muhammed Alhaji Kolo, who died as a result of gun-shot wounds inflicted on him by the insurgents.

Prof. Njodi expressed profound gratitude to the Management of NNPC led by Dr. Baru, saying the university community would not forget the supports the corporation extended to the families of the victims at their hours of need.

He sought more succour for the affected lecturers, stressing that they passed through unimaginable trauma in the hands of their abductees.

Responding, Dr. Baru called for a minute silence for the soul of the victim who died from injuries he sustained during the attack, saying NNPC was totally in support of the university.

The NNPC GMD thanked the academics for their visit, saying NNPC was ready to mobilise to the Chad Basin for further exploration noting that the Corporation would work rigorously with the University and all relevant security agencies to fortify the environment for smooth exploration.

He said it would be a great mark of honour to the departed for the Corporation and the University to resume exploration in the basin.

The GMD stated that the corporation was convinced on the need to intensify exploration activities in the North given the need to boost the nation’s oil reserves in line with the aspiration of President Muhammadu Buhari for the oil and gas industry.