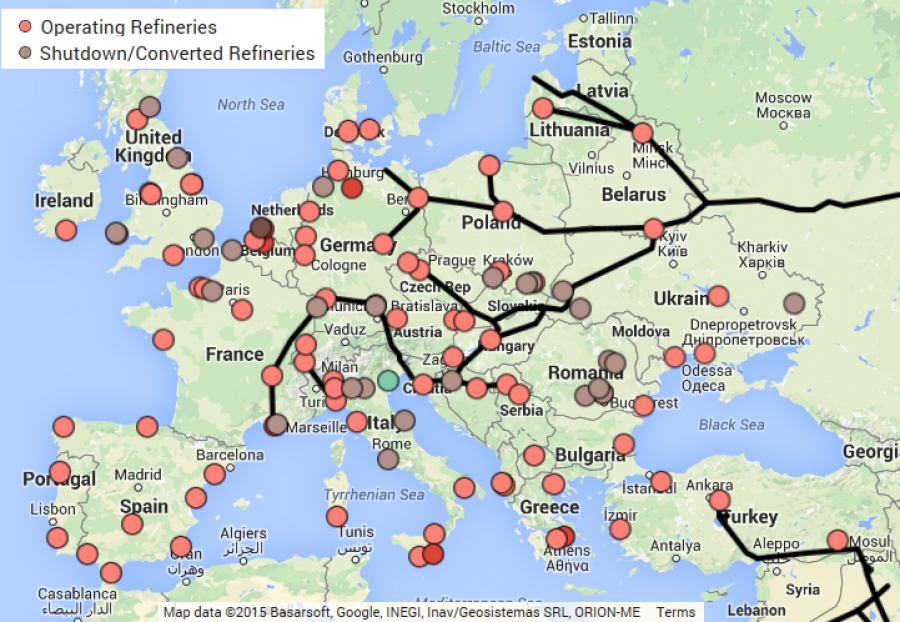 *A map of European refiners

Lagos — Fuel consumption has thimbles as a result of low demand, and is beginning to take a toll on crude oil refiners in Europe, a report by Organisation of Petroleum Exporting Countries has said.

However, adverse effect as a result of the COVID19 pandemic has now spiraled into slow demand across the globe.

This has also affected prices as countries now sell barrels below dated Brent. Nigeria as at Sunday fixed its Bonny Light grade at $13 per barrel for the week.

And since Mose countries are on lockdown, resulting in low movements and dip in demand for fuel.

“European refiners are challenged by petrol and diesel oversupply due to declining fuel import requirements from West Africa and Latin America, as well as stronger competition from the US refiners,” OPEC said in a new report.

According to the group, product markets in Asia are expected to remain weak during the summer months, as the impact of COVID-19 will affect oil demand.

“Despite run cuts of nearly 20-30 per cent in most plants, gasoline (petrol) stocks are on the rise in traditional US export markets, such as Latin America, which are backing out of delivery deals,” it said.

OPEC said this would further pressure petrol markets ahead of the driving season, adding that the US refiners were already reporting heavy losses in first quarter 2020 returns.

It said, “The oil market is currently undergoing historic shock that is abrupt, extreme and at global scale. The typical seasonal low for refiners, at the end of the first quarter of each year, is being exacerbated by unprecedented destruction in oil demand due to the global spread of COVID-19.

“In fact, oil demand in Q2 2020 has been revised downward by almost 12 million bpd year-on-year, with 60 per cent of the loss coming from transportation fuels, primarily petrol and jet fuel.”

The report noted that the virus containment measures that were mandated and/or implemented by various governments had included far-reaching lockdowns, travel restrictions and social distancing exigencies, currently affecting over 40 percent of the world’s population.

It noted that the physical crude oil market had been hit hard by oil supply glut and accumulation of unsold cargoes.

“Holders of prompt cargoes struggled to sell their crude amid a steep decline in oil demand, particularly for transportation fuels such as jet fuel and petrol, and there were significant cuts in refinery runs in almost all hubs. Sellers of crude oil were heavily discounting their crudes to find buyers,” OPEC said.