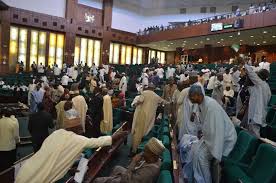 *House of Representatives in rowdy session over fuel price increase.

16 May 2016, Abuja — The scheduled appearance of Minister of State for Petroleum, Ibe Kachikwu, at the House of Representatives on Monday has left the lower chamber bitterly divided, as lawmakers bicker over whether the minister should be allowed to enter into the chamber or not.

Mr. Kachikwu was invited to brief lawmakers on the recent increase in the price of petrol.

But when Mr. Kachikwu arrived, to honour the invitation, he was met with echoes of anger from lawmakers who started shouting “No! No! No!”

Shortly after noon, House Leader, Femi Gbajabiamila, moved a motion to let Mr. Kachikwu in, but many lawmakers shouted him down.

This prompted the Speaker of the House, Yakubu Dogara, to put the matter up for a voice vote.

When Mr. Dogara asked if the lawmakers should allow Mr. Kachikwu to come him, a majority of them thundered: “No! No!”

But Mr. Dogara said the “ayes” have it, nonetheless.

But the lawmakers refused to be intimidated, continuing with their chants.

After a few minutes into the commotion, the House demanded that journalists and other observers should excuse them, leaving only members in the plenary to continue what they described as “executive session.”

Why the lawmakers invited Mr. Kachikwu and still declined to give him audience to explain himself has left many in the chambers befuddled.

As at 1:00 p.m., the House has not reopened the plenary to reporters and Mr. Kachikwu’s whereabouts is unknown.
*Hassan Adebayo and Samuel Ogundipe – Premium Times