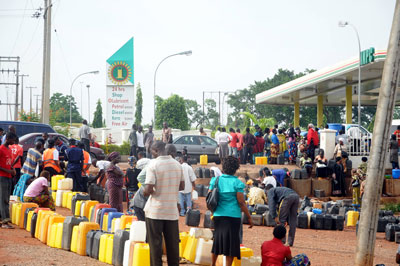 Lagos — The endless queues for petrol in Lagos and its environs have abated as retail outlets were on Monday morning dispensing the products to motorists without any delay.

SweetcrudeReports had taken stock of petrol stations around Ago-Palace way, Okota, Iyana Ipaja and Festac Town in Lagos state, and observed that normalcy had returned to the movement of vehicles in and out of the retail outlets.

It was observed that all the retail outlets that were on lock down as a result of last week’s scarcity have opened shop for business.

Fuel scarcity experienced last week had resulted in hike in transport fares, Increase in prices of products especially at stations in outskirts of Lagos and at black markets.

Oil marketers had attributed the scarcity to moves by the federal government to hike price of petrol.

They also blamed the recent e-payment policy of the Pipelines Product Marketing Company, a subsidiary of the national oil firm, NNPC as the cause of the disruption in supply.

However, SweetcrudeReports observed that the queues had started dissolving gradually as of last Thursday, and had completely disappeared this morning.

The Nigerian National Petroleum Corporation, NNPC had also come out to debunk speculations of increment in petrol price in the month of March.

“Filling station owners were being cautious but the good thing is that NNPC has cleared the air on the pricing matter,” the National Public Relations Officer, Independent Petroleum Marketers Association of Nigeria, Ukadike Chinedu, stated.

Same positive development have also been reported of petrol stations in Abuja, Nasarawa State, as well as in Niger State, Ondo, Ogun that were initially affected by the scarcity, are said to be fully opened and dispensing products at normal price of N160 per litre.

The Federal Government had in March 2020, announced the removal of fuel subsidy and deregulation of the downstream sector of the oil industry, which will allow market forces to determine the price of the product.

Despite the purported deregulation, oil marketers still lament the lingering interference of government at fixing prices of products as against what full deregulation truly entails.