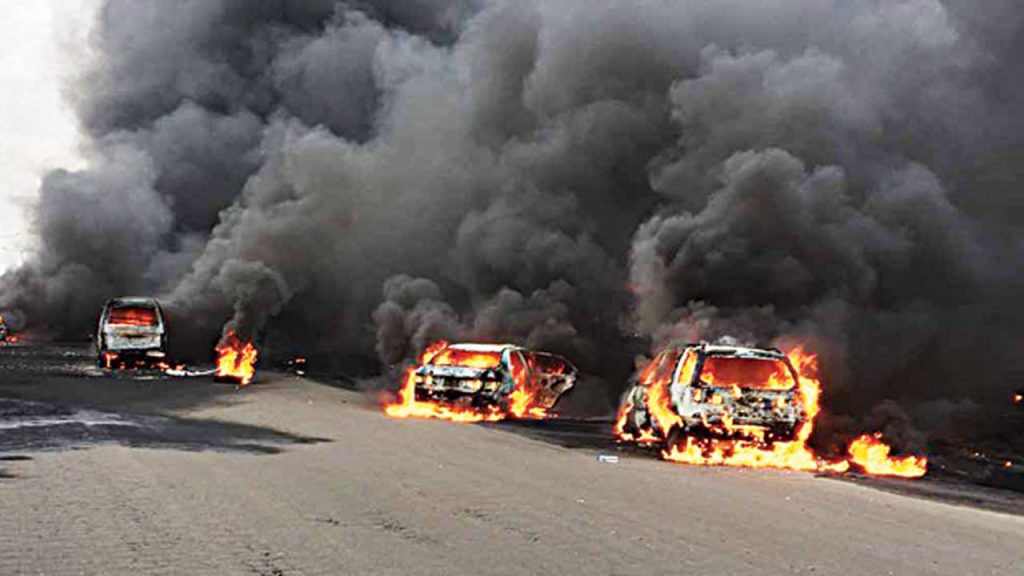 02 October 2018, Sweetcrude, Lagos — A tanker explosion that occurred this morning beside the office of Department of State Security Services, DSS, and Onireke, Ojo Barracks on Lagos Badagry Expressway, has resulted in the death of several people, SweetcrudeReports has gathered.

According to information gathered from the scene of the explosion, the fuel-laden tanker had exploded due to the bad state of the road, which led the tanker to tumble, spilling its content on the road.

As a result of the fall, other vehicles, not less than eight, were also caught in the fire, also killing an unspecified number of people trapped inside the burnt vehicles.

The contents of a Mack trailer conveying crates of drinks from Intercontinental Breweries were also destroyed in the fire. A station wagon Peugeot car, one Space bus, a Toyota Hummer jeep, a Mazda bus, a container conveying food products from Delta and an empty Mack trailer

An eyewitness told SweetcrudeReports that the accident occurred at 6: 45 am.

Some people, who managed to jump out of their vehicles on sensing danger, sustained various degrees of injuries. A woman, who jumped out of a moving commercial vehicle at the scene, was seen crawling in the mud and was mistaken for a mad woman by a large crowd of sympathisers who had gathered.

Much later after damages to lives and properties had occurred, men of the Federal Fire Service and Lagos State Emergency Services Management Agency, LASEMA, arrived the scene.

Ja’faru Anka, a Senior Marshall Inspector of Federal Road Safety Corps, FRSC, told SweetcrudeReports that he arrived at the scene few minutes after the fire started.

He said that seven vehicles were gutted by the fire, but no life was lost.

“I arrived at the scene few minutes after 5.o0 a.m. and as you can see, I am working with my team to clear up terrific traffic build up.

Due to the huge traffic as a result of the accident, road users going to Mile 2 were seen taking Tedi Road as an alternative route.