Evergreen
Home Other News Gambia: Back to a murderer state

Gambia: Back to a murderer state 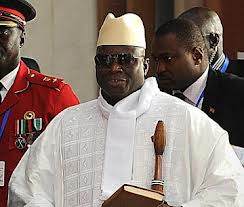 31 August 2012, Sweetcrude/African Press Organization (APO), PARIS, France – The International Federation for Human Rights (FIDH) and the World Coalition Against The Death Penalty (WCADP) have vehemently condemned the 26 August 2012 executions, according to the Gambian authorities, of nine prisoners sentenced to death and urge Pesident Yahya Jammeh to halt further executions.

Since the African Union (AU) calls to restrain from carrying out such a decision were not understood, our organisations call upon the AU to relocate the seat of the African Commission on Human and Peoples’ Rights (ACHPR), currently situated in Banjul.

Since President Jammeh announced, in an address to the Nation ten days ago, his decision to have all the death sentences carried out by mid-September, many Human rights’ NGOs have come together to stop the possible execution of an estimated 47 individuals condemned to death.

States such as Senegal, France and the U.S, as well as regional organisations like the African Union and the European Union also called upon the Gambian authorities to restrain from carrying out such a decision.

AU President in particular, Boni Yayi, expressed his high concerns and sent an envoy Nassirou Bako, Foreign Affairs minister of Benin, to convince President Jammeh to renounce his plans. Despite all these exhortations, the Gambian authorities confirmed on August 27,2012 that 9 inmates, including a Senegalese woman, had been executed, while 38 others including nationals from other West African countries, remain on death row.

“This horrible and murderous act indicates the resumption of executions in this country, which had been under a de facto moratorium since 1985”, declared Souhayr Belhassen, FIDH President.

“These executions confirm the retrograde behavior and disrespect of human rights, of the current regime, which is marked by arbitrary arrests and detentions, severe restrictions on fundamental freedoms, violations of freedom of sexual orientation, and recurrent threats against human rights defenders”, she added.

According to Mabassa for Fall, FIDH Representative to the African Union, “These executions represent an unfortunate step back for the Gambia, against the current regional and international trend towards the abolition of the death penalty”.

“The Gambian President should immediately reverse its position and ensure that no other inmate is executed, or risk being ostracized by the international community”, said Florence Bellivier, President of the World Coalition Against the Death Penalty.

FIDH and the World Coalition call upon the international community, in particular the United Nations, the African Union and the Economic Community of West African States, to intensify its efforts to prevent further executions in the country. Further, considering the disregard of Gambian authorities, and in view of the violation of the provisions of Articles 4 and 5 of the African Charter on Human and Peoples’ Rights – as reminded the ACHPR on August 24, 2012 – our organisations urge the AU to relocate the seat of the ACHPR in another country of the continent.